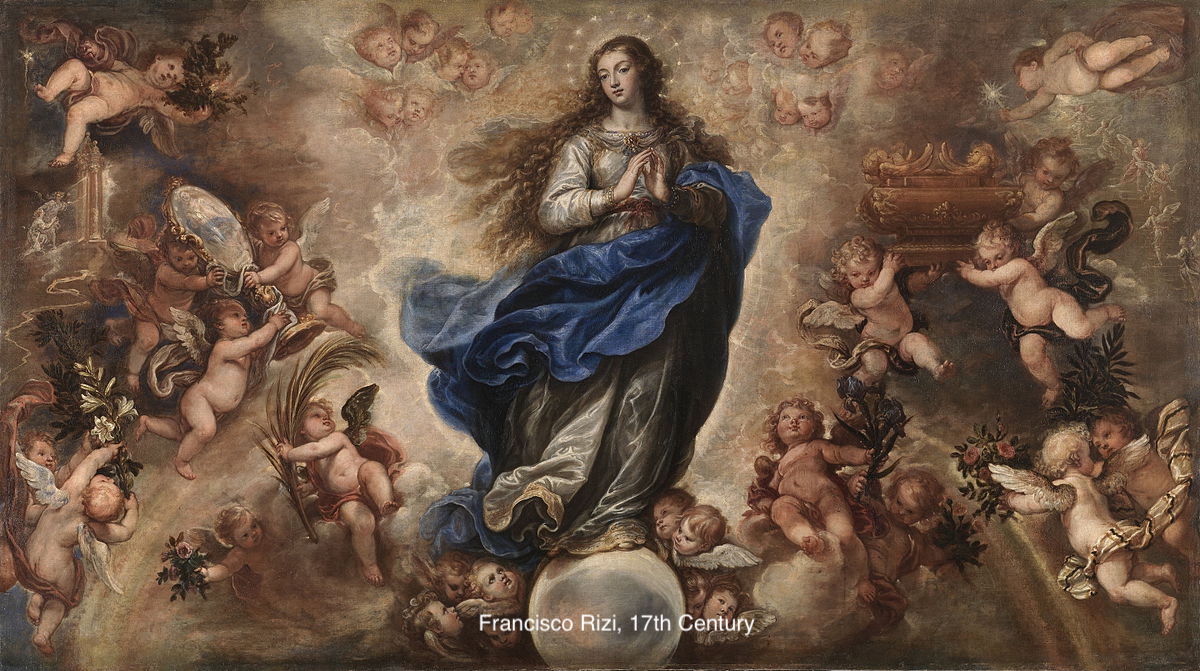 But Mary said to the angel,
“How can this be,
since I have no relations with a man?”
And the angel said to her in reply,
“The Holy Spirit will come upon you,
and the power of the Most High will overshadow you.
Therefore the child to be born
will be called holy, the Son of God.

The place of Mary in God’s economy of salvation is anchored in the Gospel of Luke, in which the things Mary had hidden in her heart were made part of the revealed literature of the Church (Luke 2:19).   There is found the account of God’s sending the archangel Michael to Nazareth in Galilee to a virgin named Mary.   The angel’s message was “You will conceive in your womb and bear a son and you shall call His name Jesus.  He will be great and will be called a son of the most High, and the Lord will give Him the throne of His father David and of His kingdom there will be no end” (Luke 1:32).  To the Virgin’s question, “How can this be, since I have no relations with a man.”, the angel replied.  “The holy Spirit will come upon you and the power of the Most High will overshadow you, therefore the child to be born will be called holy, the Son of God” (Luke 1:35)  Perhaps forty years after Luke wrote, Ignatius, bishop of Antioch, wrote to the Ephesians describing the three mysteries that defeated Satan:  Mary’s virginity, her childbearing, and the death of the Lord.   Nor did it when after forty years Saint Justin Martyr wrote that Mary had been a second Eve, which was further developed by Saint Irenaeus in his long Refutation of Gnosticism in 185.   Sacred Scripture declared Jesus to be “in every respect tempted as we are yet without sin” (Hebrews 4:15), but the question of the origin of His sinless humanity did not come up.

Devotion to the Virgin flourished in the Middle Ages, and then, in the theologically thick thirteenth century, the question came to the fore.  Given that Jesus was without sin,  Jesus’ humanity, His flesh and blood, His very nature as man taken from the Virgin, how could it be that she,  substantially an ordinary human, was able to give the Lord His sinless human nature.   The answer given is the dogma of the Immaculate Conception, proclaimed late in time, in 1854 by Pius IX, a teaching that is only secondarily about the birth of Christ but is principally about the birth of Mary.    It is the answer to the question of the origin of the perfect and sin-free human nature that God took to Himself from the Blessed Virgin Mary when Christ was conceived by the Holy Spirit.   It was and will remain the position of theologians that the Virgin Mary was conceived as was and would be every daughter of Eve, a truth which the dogma as proclaimed by Pius IX would not deny. Mary’s spotless purity—for that is what immaculate means—was not inherited from her parents, whom the Church has considered saints on their own grounds, but was a gift to Mary, grounded in her place as the mother of Jesus, who at the moment of her conception  was preserved from the stain of original sin by the merits of the cross of Christ foreseen.

So with the Immaculate Conception, when Mary, prepared for her role from all eternity, conceived by the Holy Spirit, God was making a new and perfect beginning.  It is hard to know which is most praiseworthy, the condescension of God the Holy Spirit in the gift of the Savior, or the majesty and glory evident in God’s calling and preparing the Virgin Mary, which He accomplished by vouchsafing her the relief from the stain of original sin that her Son would purchase for her on the cross.

So it happened in the fullness of time that  God began anew, founding His kingdom of the New Heart with the most fundamental of human actions, which lifted out of the context of human folly and failure that scars every human act, He blessed with a great miracle, withholding from the conceiving of the Blessed Virgin in Judea in the years of Augustus the fatal stain implanted by the drama in the garden, when, having chosen the serpent’s way, mankind would ever bear the mark of death decreed by God. So the blessed Virgin received at her conception the fullness of the great gift every baptized person receives in part, for although something of the stain of original sin must be borne by every Christian, through  the gift of water and the Spirit the root of original sin is cut in us giving the hope that its effects may be withered by grace until at last, with the Blessed Virgin, we too will see the Father’s face.   And the angel of the Apocalypse said, “Behold. I make all  things new” (Revelation 21:5).

The dogma of the Immaculate Conception is one of that family of bodily, homely, utterly essential  teachings in which the Church has long rejoiced, beginning with the resurrection of Christ’s body and ours, including the gift of Christ’s body and blood, and the veneration of the relics of the saints.  Although  doubted by great doctors such as Bernard of Clairvaux and Thomas Aquinas,  the dogma  of the immaculate conception is the essential ground of the second great Marian dogma, the  teaching that because Mary did not bear the stain of original sin, she did not die as we must but simply fell asleep, to be taken bodily into the presence of her Son, which teaching was made a part of the faith by Pius XII in 1950.

It is always important to remember that she is who we are called to be.  We are given the great gift of sharing in the life of Chirist, but no devotion or piety can make us of one substance with the Father.  Although the Church has always accorded her the highest degree of devotion, and although all ages have, with the angel,  called her blessed, Mary’s vocation was not to become divine,   but through the gift of her Son to live the perfectly human life, the first since Eve and Adam  to be born free of the ancient curse, accepting  in faith and love the will of the Father, and foreshadowing the promise that belongs to us all.