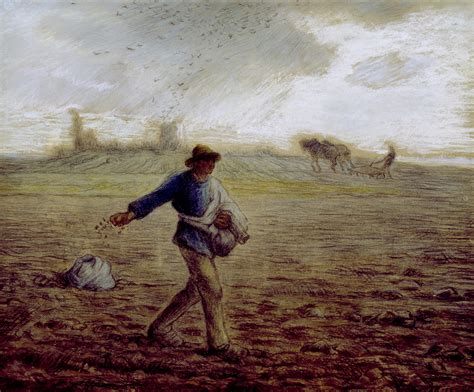 There are seed that fall in good soil, who produce good fruit, yielding one hundred-fold, sixty, or thirty.  These are those who hear the word and understand it.

The parable of the sower is somewhat unusual because Jesus tells the disciples its meaning.  Its broad purpose is to explain the failure of the grace God has poured out on the earth and its inhabitants to produce universally faith, hope, love, and obedience, and in some the seed, understood, has produced fruit pleasing to God.

Jesus gives three examples of failure, examples now familiar.   The seed that falls along the path is easily taken away by the birds because the one thus gifted has no understanding.   The seed that fell on rocky ground represents those who receive the word with joy but whose understanding is superficial; when their faith is tried, when the commands of Christ seem hard, these fall away.  The seed that falls among thorns  does not bear fruit because the one to whom it is entrusted is seduced by the cares of the world, delights in the good things of the world to the exclusion of faithfulness to Christ.

Jesus also gives a single example of success.  These are  seed that fall in good soil, who produce good fruit , yielding one hundred-fold, sixty, or thirty.   They hear the word and understand it.  The good soil is the heart prepared by grace given and received, enabling the elect to understand  the Word.

The verb beneath the word “understand”  is a compound of the prefix together or with and a verb that has many meanings.  Its use in Matthew must signal its importance, for, although it appears in other biblical texts, in the Gospels it is limited to parallel texts and to those describing the disciples’ understanding of Jesus’ words.   Of  course Jesus spoke Aramaic, but we trust the Greek-speaker who recorded His words for the Graeco-Roman world to have used the verb translated as “understand“ accurately.  In any event we know that “to understand” is different from knowledge that signifies our recognition of the facts of the  matter, although it includes that recognition, but to understand the Word sown means something deeper.   Monsignor Knox and the Douay-Rheims and the Authorized Version translate “understand” as “understanding of the heart,” and RSV in another place as “hear and grasp.”

The translators are telling us something important.  The word “heart” does not appear in either the Greek or Latin. The Greek for “grasp” is also missing from the text. Jesus is explaining that those  who failed to enter the Kingdom, although they heard did not take the Word into their hearts.   But there were those who  both heard and understood, who located Christ and His Gospel at the center of their lives, those who have grasped Jesus and His message, who make His person and His words the very principle of their thoughts and actions, bearing fruit for the Kingdom of the New Heart over which Christ now reigns as king.

Jesus offers an explanation of the failure of those who hear but do not understand.   Christians are not permitted to say that Satan caused them to sin (James 1:13), but it is evident from Scripture that he never stops trying, and that with the cooperation of the human will, he may have his successes.  From the moment of the Incarnation, Satan has roamed the earth seeking to destroy the faith of the children of the Woman Clothed with the Sun (Revelation 12:17).  His principle method is obfuscation and studied neglect. It is he who sows weeds among the wheat that grows in the Church.  And the weeds will continue to grow because Jesus warns the zealous disciples that if they try to clear the field of weeds, in rooting up the weeds the wheat may be damaged.   And this means that the Kingdom in its historical manifestation as the Church will always be a mixed community consisting of some who have taken the Gospel to heart and some who hear but do not understand.   It is a mercy that only Christ knows who has understood with the heart and who has not; this will not be revealed until He comes again, until the book of life is opened at the end of the age.

Meanwhile understanding the Good News planted in the human heart prompts many actions: belief, obedience, and above all love, love for God and love for our neighbors, for those we come upon as we walk the path that is our life.   Each of these has its own necessity.   Belief involves belief in the merciful acts of Jesus by which He bought our freedom with His death and resurrection.  But it involves more; each sentence in the Creed invites our belief, and we dare not prefer belief in one of Jesus’ actions to another.    For belief to be effective it must be what is called theological faith, belief that is ours not because we consider it suitable or even because we are grateful for it, but belief because the truths of our religion are expressions of the authority of God.   In an analogous way heart-understanding expresses itself in obedience.  Very often the yoke is easy and the burden light, but the day will come when conscience makes a claim that desire can follow only with difficulty and humility.  It is the evangelist John who reminds the ages that the sure sign of our love for Christ is our obedience to His commandments, of which the first is love of our brothers and sisters.  And as for love, it is the supernatural empowering gift that enables belief and obedience.

What the Word in our hearts promotes may seem simple, but it is in reality deep.  Jesus commands us to love God with all our hearts, all our souls, and all our minds (Matthew 22:37).  And perfecting the Word understood in a life lived is made difficult by the fact that God is not unopposed in this world.  As Matthew 13:24–30 tells us, there is an enemy roaming the earth, seeking endlessly with demonic energy to snatch the Word from every life, sowing doubt, ever proclaiming the glory and the satisfactions of “the lust of the flesh, the lust of the eyes, and pride of life.”  In our present century Satan has an easy sell, for he moves among a people, perhaps even  Christian people, who have never taken Christ and His words into their hearts, who do not understand and who do not know that they do not  understand.

Therefore to our duty to believe, to obey, and to love, there is added one more, the duty to witness.   You, said Jesus, are my witnesses to the ends of the earth.   Laying aside not the grace of conversational engagement but the fear of intruding upon others and the pusillanimity that cannot bear a challenge, refusing the stance that considers religion too private to have any place in the public square, the time has come to accept the scandal of the Gospel, that no one comes to the Father except through His Son Jesus, that men are appointed once to die and after that comes judgement, that God’s judgement is the ultimate source of meaning, that this same judgement rewards those who long to see the face of God and allows those who have not and will not understand the consequences of their neglect.