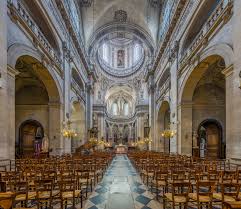 Few of us will have had the privilege of saying in a liturgical setting the third ecumenical creed, the first being the Apostles Creed, the ancient baptismal creed of the   Roman Church, and the second the creed of the Council of Nicaea.  Named eponymously for Saint Athanasius (296–373), the great archbishop of Alexandria, victorious opponent of Arius, it appears in the fifth century and soon became part of monastic life, in which context it is still occasionally sung.  A masterpiece of medieval Latinate poetry, comparable perhaps only to the Te Deum, it fell out of favor in part because of its opening lines:  “Whosoever would be saved, it is first of all necessary that he hold the Catholic faith, which faith except everyone do keep whole and undefiled, without doubt he shall perish everlastingly.”  In an age in which life is not rightly ordered by truth that commands intellect and heart,  given by God to whom we  owe obedience, but opinion sincerely held or belief comfortably arranged to suit one’s needs, these words seem narrow and off-putting, and this because the truth that the wideness of God’s mercy is founded in the narrowness of His  commands is often neglected, and perhaps also because, forgetting that God gave His  promise to one politically negligible nation, it seems tiresome and  embarrassing to stand alone against a world of unbelief, especially when one is haunted by the Hegelian-like conviction  that if  the catholic faith were really God’s work it would have been made universal and effective long before now.  The warning of the Creed is not the same as God’s judgement, and the same medieval civilization that saw so clearly the necessity for the submission of intellect to truth, convinced that unbelief is damning, was from Justin Martyr in the second century to Dante in the fourteenth, most inconsistently unwilling to confine summarily to eternal loss Plato, Aristotle, and Trajan, among many others who followed the divine reason.

And this, says the Athanasian Creed, is the catholic faith:

That we worship one God in Trinity and Trinity in Unity,
Neither confusing the persons nor dividing the substance
For there is one person of the Father, another of the Son,
another of the Holy Spirit.

But the Godhead of the Father, of the Son, and of the Holy Spirit
is all one,  the glory equal, the majesty coeternal.

The Athanasian Creed, which proved too long for regular recitation by hurried moderns anyhow, fell out of use, and with that desuetude a great witness to the eternal and glorious existence of God, who is to be worshipped in careful majesty until Christ delivers up the kingdom to the Father.  The creed reaches the thirty-eighth of its forty-four lines before mentioning the salvation of mankind.  It is part of God’s self-founding glory that He is in Himself life perfect and complete, and the creed of Athanasius is the revealed description of that perfect life.   God the Blessed Trinity commands existentially, moment by moment, all times and all ages.   Nothing of past and present is unknown to Him; the destiny of every creature is ever before Him.  What we call history stands before Him as a creature of His will and Providence.   He is Father not because we are taught to call Him Father but we are taught to call Him Father because He is the Father of the Son who is begotten by Him without beginning and forever, and in which relation fatherhood is complete, the whole of creation existing always in the Son through whom it and we were made.    When the Son takes Human nature of the Virgin Mary He fulfills what has been always in the Father’s heart.   When the Father and the Son send the Holy Spirit into the world He finds an elect foreknown by God and beloved by Him from the beginning.  Although Christ was born on a certain day in a village in Judea, and although each person has a story that will be lived out in time until it is perfected when we are born into eternal life, a story that is uniquely ours, our good works, although they may fill up and make effective Christ’s sacrifice in time (Colossians 1:24), will add nothing to the sacrifice of the cross and the glory of God.  So great is the glory of the Blessed Trinity that we can say nothing about Him beyond barest intimation unless the words are shown to us, as they are shown us in the Athanasian Creed.

And the end of this revealed perfection is that, while God does not need us, of His condescending sovereign will founded in the superabundant love that exists among and causes the three divine Persons, He desires us and our good.   From the moment when He walked in the garden and called Adam’s name until the day when He says, “Come ye blessed of my Father, inherit the Kingdom prepared for you,” He has guided our steps, our steps, just as He has kept in His providence the sparrows.    He has, as the great Dionysius wrote, yearned for us.   But He does not need us.   He rejoices over the faithful angels and the just souls made perfect, but in His justice He does not mourn the loss of those who, after He has sent His  messengers, reject or neglect him, for His providence is perfect.   Our praise adds nothing to His glory.  He does not need us.  It is the constant theme of the Fathers that our creation and our salvation has been and is perfectly and doubly gratuitous, both creating and redeeming.  True, as Athanasius taught, God has a plan that He will not see frustrated by the Adversary. But this tribute to the divine indefectibility is not the consequence of any necessity beyond the indefeasibility of His eternal, never-changing purpose.

It is unthinkable to us moderns, standing at the center of the renaissance image of man, arms and legs extended to define the circumference of the real, that we should be unnecessary. This truth is certain to seem lacking in charity, and to conjure the image of God without altruism as we understand it.   But the first purpose of God’s existence to the degree that we can know it is His self-founding glory.  What the heavens declare is God’s glory (Psalm 19:1); nature witnesses the eternal power and deity that belongs to the glory of the immortal God (Romans 1:20, 23).  The last words in the crescendo of praise that prefaces the great offering is “Glory be to Thee O Lord Most High.”   The Mass is not about us; it fulfills our needs because it is not framed to satisfy them in our terms but to recruit mind and heart into reality.

When in 1547 the great Council of Trent considered the final cause of the justification of man before God, the cause that answers the “for the sake or purpose of” question, it decreed that there should be named not one such cause but two.   “Of this Justification the causes are these: the final cause indeed is the glory of God and of Jesus Christ, and life everlasting.” The second purpose, our resurrection to life with God, is founded in the first, which is God’s own glory.    It is part of the subtle atheism of our time that God needs us, when the glory of it all is that while He does not need us, yet He loves us with an everlasting love.   He chose Israel, and in Israel us, not because of any goodness or greatness in us, but because He loved us.

Dignity is not granted by political decree or by the uncertain esteem of our fellow creatures, for it is the grounds of the dignity of every person that the God of eternal glory, Father, Son, and Holy Spirit, who does not need us knew us from the beginning, prepared good works for us to walk in, and in every listening moment guides our steps.  It is as we bend our hearts to the catholic faith, which is the unqualified worship of the Trinity in majesty and glory, that our meaning and purpose, which is that we find not ourselves but God, is fulfilled.  His is the perfect life, always and eternally fulfilled; our little life finds fruition as we share in that perfect life by giving Him now, in the moments of this present adventure, the glory that we will one day give Him forever.

Each moment of this offering of our six-days’ lives is caught up, forgiven and made acceptable in the offering by the Church of the Great Thanksgiving on the seventh, to be finally perfected in what the Fathers call the great eighth day before God’s throne, when we say with the company of heaven:

Worthy art thou, Our Lord and God, to receive glory and honor and power, for thou didst create all things and by thy will they existed and were created (Revelation 4:11).