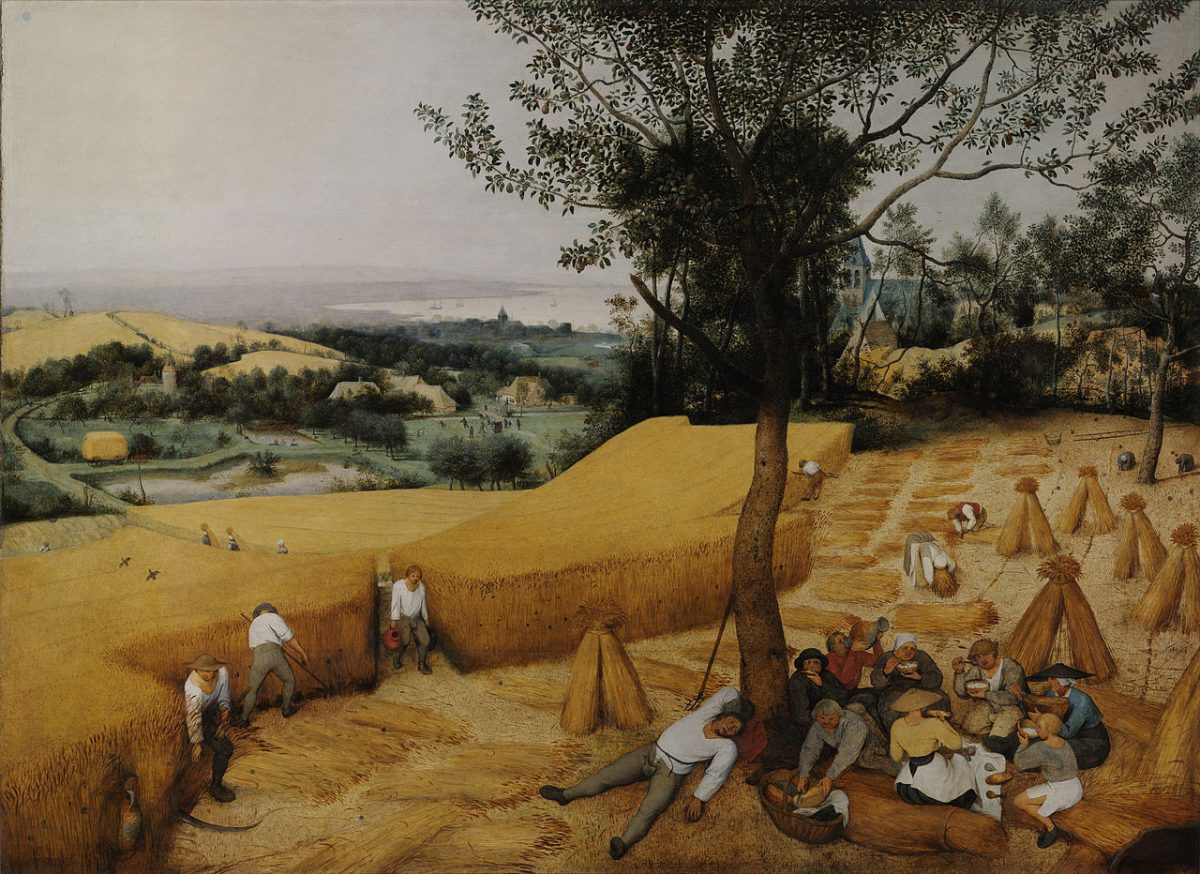 The Gift of Work

Brothers, you know how one must imitate us.
For we did not act in a disorderly way among you,
nor did we eat food received free from anyone.
On the contrary, in toil and drudgery, night and day
we worked, so as not to burden any of you.
Not that we do not have the right.
Rather, we wanted to present ourselves as a model for you,
so that you might imitate us.
In fact, when we were with you,
we instructed you that if anyone was unwilling to work,
neither should that one eat.
We hear that some are conducting themselves among you in a
disorderly way, by not keeping busy but minding the business of others.
Such people we instruct and urge in the Lord Jesus Christ to work quietly and to eat their own food.

It is a matter of consummate interest and importance that before Adam fell, he was put in the Garden and told by  his Creator to till it and keep it. From the beginning, it was God’s plan that the earth required the perfecting hand of man.   Although later the earth would be cursed because of man’s complicity in the great rebellion, work itself was holy, having a specific object, to bring forth from the soil the bread by which mankind lives, which bread in its highest use would become the body of the Lord.  Sin makes the ground resist the human hand, but work itself is a gift commanded at the dawn of creation.

Until the day of our grandfathers, while there would be workers with words, priests and teachers, and also men of just violence, soldiers, tilling the soil would be the common vocation. Now work is likely to involve neither the plow nor the scythe, but the electronic screen through which all that is in the world flows into mind and imagination.

Paul’s situation is one in which some do not work while living off the charity of others, perhaps believing that the apostolic order of common property remembered in Acts and effective in the days of Pentecost was permanent (Acts:2:44, 4;32). It may have been easy to fall into this way of life in a community of Christians who were daily expecting the Lord’s return, making the pursuit of duty and profit  redundant. Paul’s point is that work, producing one’s own food, orders the soul rightly, whereas sloth, the vice of laziness should not be found among Christians, leading as it does to moral and hence finally to civil chaos.. In support of this admonition, Paul offers his own example, the example of a life spent not only in apostolic labor that repeatedly brought him into distress and great labor but also a life spent practicing the craft at which he was a master, tentmaking, so that his maintenance was never a charge on the Churches he served (Acts 3:18).  It was a tender point. Paul pointed with some pique to the fact that he and Barnabas were the only apostles who had foregone the support they might justly have claimed and which others enjoyed (I Corinthians 9:3–7).

Work usually means doing, and so it is a verb, but there is also a noun, the Latin opus, used with reference to something created with forethought and imagination.    We will say that Beethoven’s Opus 53 is Sonata Number 21 in C Major, a work complete in itself, as perfect as its composer could make it.   Paul is seeing his life as an opus, a finished work when he writes the beautiful passage that begins, “I have fought the good fight, I have finished the course, I have kept the faith.  Therefore there is laid up for me the crown of righteousness” (II Timothy 4:7). And in that way every life can be an opus, not simply a labor.

The key to a life that is a perfected work is discovering a vocation, from the Latin noun vocatus and the verb voco,  or calling. For many this will mean  accepting the shape of necessity as the will of God,  a life of labor dictated by circumstance, which must then be transformed often by labor into an opus. This possibility is among the blessings of a world now often freed from labor on the land and cast into a cauldron of possibility.   A person now twenty may become if not anything at least a great number of things, and in a world in which we no longer inherit our vocation from our father, and are often not bound by necessity, this means the danger of possibility.   When the forms are dissolved, each person must as is said “Make up his own mind.”

In this exercise of discerning a vocation there are no rules but there are considerations.  There is the possibility that God is calling you into His immediate service.  There are your responsibilities which must be consulted. Then there is the fact of your natural abilities, which are a guide.  And perhaps above all there is the fact of your interests. And out of this texture of projects and necessities the Christian will make a life that is his or her opus.

At present work is more than usually frustrated  by various schemes that propose to take away that part of work that contributes to the pain of life; the monotony, the limitations on freedom.  It was part of the grand illusions of the sixties that we just might be able to invent a laborless world. Perhaps robots would do it all! Or automation.  This, these proposals, overlook the truth that work is not only good for the soul but essential to the good life. Our meaning is in forming our own opus, that finished work of  our lifetime, spent either in the factory or the office, that says well done.

That opus will have many meanings and many levels;  imaginative, affective, economic, but the one level that will locate and give true value to the others is the moral meaning of every action of a lifetime.   Jesus says in the Gospel of Matthew that what our lives mean is to be found in what we do for others. This begins, as Paul says, by working with our hands and minds, by minding our own duties and not the business of others, taking care of ourselves and our families.  Paul has harsh words for those who fail in this, writing that “if anyone does not provide for his relatives, and especially for his own family, he has disowned the faith and I worse than an unbeliever” (I Timothy 4:8). This care for others ranges out from our own to touch the hungry, the stranger, and the naked with the divine charity.  To those who do these things, the Lord will say, “Come you blessed of my Father, inherit the Kingdom prepared for you from the foundation of the world” (Matthew 25:34).

There are varieties of Christianity that doubt that our works matter in the face of the all-sufficient efficacy of faith.  To this it can only be said: These, these works, this are my life, taken together my opus, a work of your grace offered to you, O Christ.