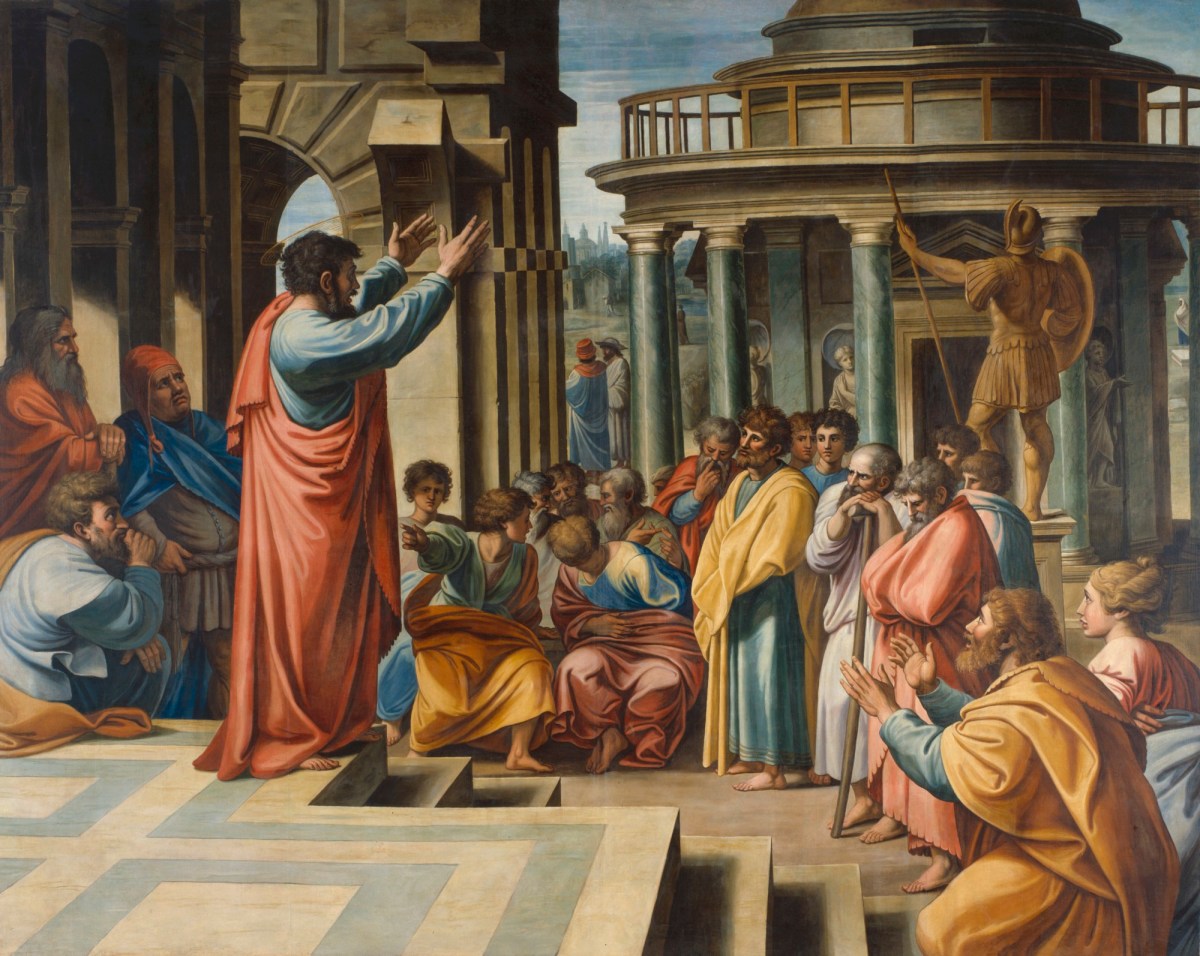 Always be ready to give an explanation
to anyone who asks you for a reason for your hope,
but do it with gentleness and reverence,
keeping your conscience clear,
so that, when you are maligned,
those who defame your good conduct in Christ
may themselves be put to shame.
For it is better to suffer for doing good,
if that be the will of God, than for doing evil.

In the first line of the text above, behind the word for explanation is the Greek apologia. This means defense, a tougher word than explanation, which is given in the official translation.  Explanation tends to be self-referential.  One might have adopted the Christian faith from expediency, from the pressures of life’s unexpected events.  What Peter means, I believe, is that Christians should be able to give a defense of the Incarnation and the Atonement, to represent truly God’s wrath against the negligent and the unrepentant and the blessings He bestows on those who love and obey Him, and also to tell of the great hope that Christians will be with Jesus in a renewed creation at  the end of the age.

Because Christians from the beginning considered, and still consider theirs the universal religion revealed by God to the Apostles, with a mission to all mankind, its apologists, while understanding that it is God who calls the elect, sought to convince the world that the texture of ideas it proposed to the intellect was true, as such deserving, first, consideration and finally acceptance. The first apologist was Paul, who appealed not only to principles found in the Hebrew Scriptures, but to tradition, conscience, nature, and poetic insight, arguing in Romans that Gentiles should learn from nature the power and existence of God (Romans 1:21–22) and from human nature that the existence of conscience is enough to establish the claims of righteousness (Romans 2:14–16). Paul sought by quoting the pagan poets and noticing the unknown god to make an apology for Christianity to the council of the Areopagus (Acts 17:22–31).

Christian literature before Ignatius tends to be didactic as in the Didache, or disciplinary as in First Clement, but there survives a fragment of the lost Apology of Quadratus, probably written as early as 124.  Justin wrote his First Apology, addressed to Antoninus Pius, about 150. In his Against the Greeks Apollinaris of Hierapolis addressed the Emperor Marcus Aurelius, and Miltiades’ lost, nearly contemporary Apology for Christian Philosophy and Athenagoras of Athens’s Plea Regarding Christians, written after the Emperor Commodus was associated with his father Marcus Aurelius in 176, followed. The anonymous Epistle to Diognetus and Tertullian’s To the Heathen and Apology, belong to the early third century.  Underlying their intellectual, theological, and moral arguments was always the conviction that Christianity, far from damaging the Empire by teaching a degrading superstition, was the agent through which religion was rendered reasonable and morals lifted above the turpitude that characterized popular culture in the age of the Antonines, 138–92 AD. After Constantine made Christianity legal Christian apologies were fewer, while stories of the martyrs and of miracles tended to reinforce Christian belief.  Contemporary with the Constantinian revolution were the two appendices to his masterful treatise On the Incarnation, a Refutation of the Jews and a Refutation of the Gentiles.

The apologists of the second and third centuries shared certain themes, the proof from prophecy which argued that Christ fulfilled perfectly the prophecies of the Hebrew Scriptures, and the claim that Plato learned from Moses, who was much older than any philosopher.  There was the moral argument, which claimed that paganism had produced a squalid culture, which permitted infanticide and sexual promiscuity, while Christianity fostered a culture of purity and restraint.   And with a positive note it was argued that Christianity was good for the empire.  Their tone was factual.  Their arguments never became personal. But at the heart of it is always the conviction that Christianity is true, that while they may share some truths that belong also to  Plato, Christian doctrine is the summary regarding the destiny of man and his responsibilities before God.  These were not explanations for their hope but defenses of the faith on which that hope was founded. Paul added two injunctions.  Apologists for the faith were to make their defense with courtesy.   And when the world rejected their apology they were not to offer angry rejoinders but to bear rejection with the patience of Christ.

The apologetic task directed toward an unbelieving world became important again in the late nineteenth century, when Christianity was losing the place it had held in the culture since the fourth century.   Robert Hugh Benson (1871 – 1914) was an  Anglican priest who in 1903 was received into the Roman Catholic Church in which he was ordained priest in 1904. His notable dystopian novel Lord of the World (1907) predicted the culture of the secular future. Ronald Arbuthnot Knox (1888 – 1957) was an English Catholic priest, theologian, radio broadcaster, and author of detective stories. Meanwhile he was a formidable defender of the Catholic faith in works such as  Heaven and Charing Cross (1935) and In Soft Garments (1942). Gilbert Keith Chesterton (1874 – 1936) was an English writer, philosopher, lay theologian, and literary and art critic, author of two of the greatest apologies in the English language: Orthodoxy (1908) and The Everlasting Man (1925).    Two contemporaries who deserve gratitude are Peter Kreeft, a professor of philosophy at Boston College and King’s College in New York, author of over eighty books on Christian philosophy, theology and apologetics and Thomas Howard, whose “Chance or the Dance” and “Christ the Tiger” are classics of literary Christian apologetics.

These authors, and a hundred others, took on the task of defending the faith in the face of a rising secularist tide, perpetuating the work of Quadratus and Justin Martyr in the twentieth and twenty-first centuries, always remembering Saint Paul’s injunctions that defense should be carried on with courtesy and that apologists should never be disappointed by the world’s rejection but should bear with patience in imitation of Christ.  Every generation will have its apologists, defenders of the faith in  the face of the opposition of the world.  Their tasks will be more effective when they are surrounded by the prayers and example of the faithful.