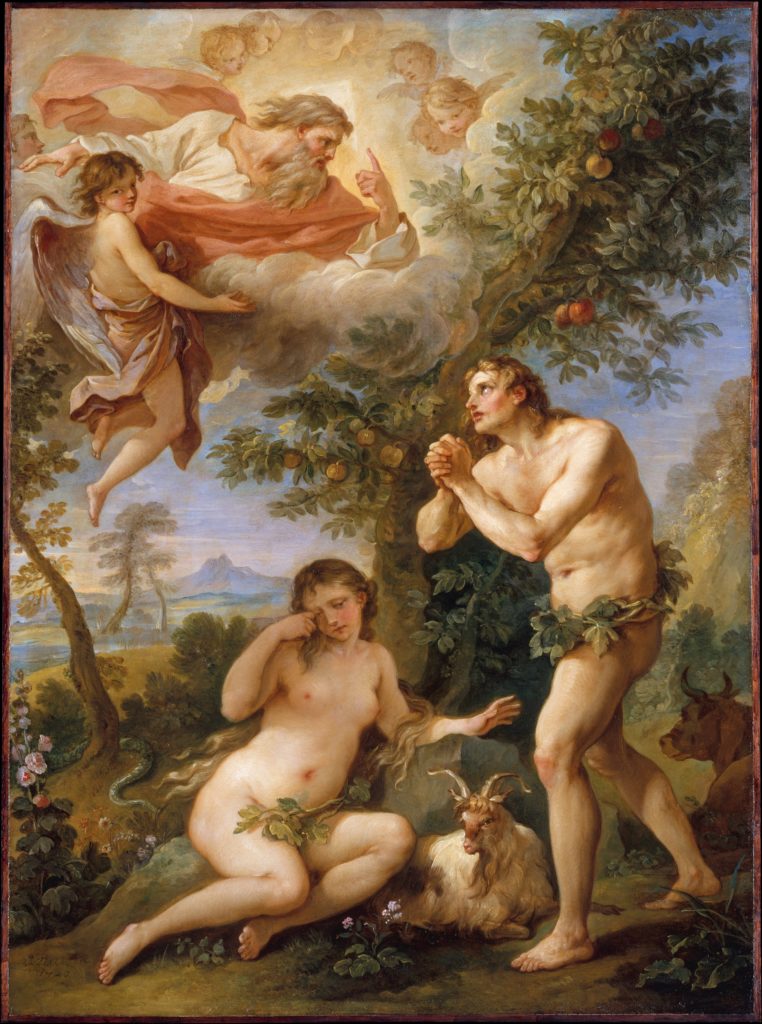 Brothers and sisters
Do you not know that your bodies
are the temple of God
Because the Holy Spirit dwells in you?
1 Corinthians 3:16

In the beginning God intended to be with us, for He came down to walk in the garden He had made and called our name (Genesis 3:8–9). But we hid because we had preferred Satan’s proposition, that we would eat the fruit of the tree, know good and evil for ourselves, and, true to God’s warning, suffer death.

The entire rest of the story, through the long years of slavery in Egypt, wandering in the desert, conquering the promised land, apostasy, captivity, and return, can be seen as the Lord God’s unrelenting attempt to get in touch with us and, finally, to give us the gift of life with Him. So after the days of the early chapters of Genesis, after rebellion, murder (Genesis 4:8), trafficking with demons (Genesis 6:1–4), the futile attempt to know God through their own means and on their own terms (Genesis 11:1–9), perversion in Sodom and Gomorrah (Genesis 19;1–13), He began, as we might say, to re-establish communication with us. He found Abraham, the man who would believe His words (Genesis 15:6); and Moses, who would lead His people out of slavery into the promised land of Canaan. He appeared, terrible and awful to give the law (Exodus 20:1–26, 24:1–18)). And He did something else. He commanded the construction of the tabernacle: “Let them make me a sanctuary that I may dwell in their midst” (Exodus 25:8), a temporary, moveable temple, its purpose not unlike the purpose of the Capitol in Rome with its temple of the great god Jupiter with twelve tables of the law affixed.

The tabernacle was a place of memory, presence and sacrifice. Its center was the ark of the covenant, containing the stone tablets on which the law was written, and above which God Himself would appear, between the cherubim, in the Holy of Holies, to speak to the high priest as he offered sacrifice on the day of Atonement. So the Ark journeyed with Israel until they reached the land God had promised, until Solomon had built the Temple as a place of God’s presence. God’s name dwelt there, and it was toward this place that Israel was to pray. The Jerusalem temple was a holy place because in it God appeared. The temple of Solomon must have been of surpassing beauty, its columns crowned with lily-work, its walls carved round about with figures of cherubim, palm trees, and open flowers (I Kings 6:29, 7:22). But above all it was a place in which God was present, appearing over the mercy seat, between the cherubim, to hear and to forgive.

Solomon’s temple was destroyed in BC 586 by the Babylonians. A second temple was rebuilt beginning in 516, and this was the temple the construction of which Herod augmented and beautified. It was from this temple that Jesus drove those selling oxen and sheep and pigeons as well as the money changers, with the command: “Take these things away, you shall not make my Father’s house a house of trade. His disciples remembered that it was written, ‘Zeal for thy house will consume me’” (John 2:19-22, Psalm 69:9). And when the Jews asked for a sign that justified His actions, Jesus said “Destroy this Temple and in three days I will raise it up.” The Johannine author adds, “But He spoke of the temple of His body,” which the disciples did not understand until after His resurrection.

When the Word became flesh, in Christ God dwelled in human nature, so that Christ’s holy body was the temple in which the Word was made flesh. For Christians, the body is formed by a soul in which the Spirit of God lives, so that the body of every believer was and is a temple. Of all the aspects of Christianity that the Greeks found unintelligible the most scandalous was the Christian belief in the resurrection of the body, for one of the most certain assumptions of Hellenistic culture was the ultimate worthlessness of the human body, which was at best a prison from which the soul longed to escape. The human body, the philosopher Celsus assured his readers, was no different from the body of a bat, destined for decay and dissolution.

But the apostles had seen Christ alive after His death on the cross; belief in the resurrection was unshakeable and had consequences that not only informed faith and inspired hope but which dictated behavior, and which proceeded on the conviction that the baptized bodies of Christians had a glorious future. The body of every Christians participated in the body of Christ, so that individually they lived in Christ but collectively they were His body the Church (Ephesians 5:23). Thus Paul’s charge against fornication was not only its sinfulness but its scandalous, blasphemous character, being as it was an impossible attempt to join Christ to a prostitute. Your bodies, Paul reminded, belong to the body of Christ (I Corinthians 6:15–-16), and as such they are offered with mind and heart to God: “Present your bodies a living sacrifice,” consecrated to God, worthy of His acceptance. which is your reasonable service” (Romans 12:1).

This belief that the body had a future no less noble than that which belonged to the soul, and that Jesus’ atoning death offered eternal life not only to the soul but to our soul-informed bodies, was the belief with which Christianity invaded Hellenistic culture, substituting for the lingering fear that was the background of every life belief that, once joined to Christ in baptism, once fed on His Body and Blood, Christians, having in the time of God’s providence passed through the doorway of death, would find it to be a new birth, a putting on of the body of glory, and would be with Him in a place of light, refreshment, praise and beauty forever. We do not, Paul wrote, expect to be unclothed but clothed upon (II Corinthians 5:4), when our bodies, sown in the corruption and dishonor which the philosopher Celsus understood so well, shall be raised in incorruption and glory (I Corinthians 15:42–46).

Given this hope, it is important to treat the body as the holy thing it is because you will have it with you in some form or another forever. There was a confusion in the fifth century, with some maintaining that in the resurrection every Christian will have a new body, unrelated to the body we bear through our earthly years. After due consideration the fifth ecumenical council in 553, in its first and eleventh anathemas, determined this to be false; the body of the resurrection will be the body we now bear, perfected in some way, the body as it would have been had not original sin and its minions disease and disfigurement left their marks.

From the time when Paul advised taking a little wine for the good of one’s stomach (I Timothy 5:23), Christianity has been on the side of pleasure and the bitter foe of those who attempted to deny our bodilness. The great heresy of the first three centuries did not deny that Jesus had come but insisted that He had not come in the flesh (I John 4:1–4, II John 7). The theology of the semi-Christian dualists from the second century Paulicians and Gnostics to the thirteenth century Albigensian the great Church simply denied, while at the same time every sensuality, every claim of the senses to run unchecked by the discipline of grace-enabled restraint has always been condemned.

Which brings us to the twenty-first century. Grace may perfect the body, but the body unaided by grace will reliably affect the soul with its passions. The appeal of the body is immediate. Sins of envy and emulation through which fallen will challenges goodness and truth are, while persistent, more subtle, and perhaps more damning. Settled hatred or envy or pride will lead to destruction more reliably than the common sins of the flesh; it is possible to lose one’s soul to the darkness while refraining from sins of the body, but the process is often half-conscious and slow, while the appeal of the body is immediate. This was a reason why, having rebelled and fallen, having realized their condition, the first thing our first parents did was cover their nakedness (Genesis 3:7). We have uncovered ours. Modesty is the virtue that removes temptations posed by the withdrawing those parts of the body that incite sensuality most immediately from sight. Immodesty always gains interest, sometimes desire and lust. There is a reason why so many advertisements for automobiles and vacations feature a beautiful woman; if men won’t buy the car, they will almost always buy the woman. So Saint Paul says women should adorn themselves in modest apparel (I Timothy 2:9); don’t dress to attract attention. The flesh as created by God is intrinsically good, but it is not innocent, and our senses are disordered.

Of all the commandments that Our Lord gave in the Sermon on the Mount, the most challenging in Christ’s list of transpositions from objectively guilty behavior under the law to sins of the heart is surely His command that our sight, that light within us that illuminates the world we see (Matthew 6:22 ), be innocent, that looking on a woman with lust is as good as the act, while the goal is the purity of heart mentions in the Beatitudes (Matthew 5:8, 27–30). The moral antonym for lust is not a charity-less aridity but another more profound, always innocent, love, love for Christ and a desire to please him. The great project of a lifetime.