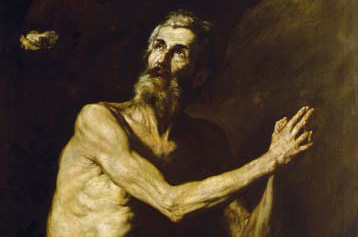 Unsure are our plans,
For the corruptible body burdens the soul
And the earthly shelter weighs down the mind that has many concerns.
And scarce do we guess the things on earth,
And what is within our grasp we find with difficulty.
But when things are in heaven, who can search them out?
Or who knew your counsel except you had given wisdom,
And sent your Holy Spirit from on high.
And thus were the paths of those on earth made straight.

The wisdom literature of the Old Testament stands in the place of what Greeks would have considered philosophy.   In a general way wisdom literature, books such as Ecclesiastes, catalogues the challenges of life and anticipates but seldom finds the resolution that awaits the Incarnation and Pentecost.  The Book of Wisdom, or the Wisdom of Solomon, although something of a favorite of the Fathers, and always part of the Greek Old Testament, was,  with great loss to English-speaking Christianity, among those books omitted by Luther and hence absent from the later  editions of the Authorized Version.

The author acknowledges that the deliberations of mortals are timid and our plans unsure.   For this the author proposes two reasons.   The insight that the body weighs down the soul is among the commonplaces of western experience and literature, issuing in the conviction that the body is a kind of tomb for the soul.  There may be no more than a few decades that separate the observation of the author of the Wisdom of Solomon from Saint Paul’s despairing cry, “Who will deliver us from this body of death” (Romans 8:24).  And it is Paul who will describe the consummation of the work of grace in us as “the redemption of our bodies.”  There is something wrong with our bodies that only a supernatural gift can heal, for, as taken from the earth they share in the Fall of nature, which from our first parents’ disobedience, from the day when God afflicted the ground, suffering from our sins, “groaning and travailing” in Saint Paul’s words (Romans 8:22).  And more, there is the universal tendency to see the body as bearing down the soul because as the repository of the senses the body suffers the consequences of the disordered passions of the mind, so that we may unfairly abuse the body for sins originating in, or at least belonging to, the soul.  All of this is to say that the almost universal human intuition, unjust though it may be, that the body burdens the soul, is a fact of our existence.

And, as the author of Wisdom points out, if this were not enough to bedevil the human condition there is our ignorance.  We are able, with difficulty, to grasp things on earth that lie within our reach, although our deliberations are timid, our plans unsure.  As the high tradition would say, natural reason, exercised daily in  common sense and thoughtful action, and at its noblest and best in philosophy, can know many truths about nature and man, and can even grasp at the fundamental fact of God’s existence and perfection.  But when matters belong to heaven who can search them out?    And the answer Wisdom gives is that we cannot unless God give us the wisdom that comes from His Holy Spirit.

This advice from the author has encouraged the argument that the Wisdom of Solomon belongs to the century after Christ rather than, as is the more common opinion, to the century before.   For in the Old Testament the Holy Spirit appears as a light moving through the darkened forest of the world, present in Genesis as the great form-giver bringing order out of chaos, always as the gift given the prophets, so that the Church will name the Holy Spirit the Prophetic Spirit, so that Jeremiah will prophesy that the great sign and reality of the Day of God will be the pouring out of God’s spirt on the sons and daughters of Adam.

The ignorance that besets the human family is confusingly incomplete.  It is a grand thing, this desire and ability to know, the capacity that raises us above other animals and reflects in us the image of God.  Paul at the Areopagus agrees with the philosophers that God has designed us to seek God in the hope that we may find him (Acts 17:27).  And Ecclesiastes acknowledges that God has put eternity in our hearts, yet not so that we can know God’s purposes (3:1). We do see, but as in an imperfect mirror, darkly, and such knowledge as we do possess, when it   presumes to know what we do not know, when it speaks when it should listen,   becomes an occasion of error and disappointment.   That is to say, natural knowledge, to find its fruition, must be perfected by knowledge of God that only He can give.    So the inspired writer asks the Lord, “Who ever knew your counsel, except you had given wisdom and sent your Holy Spirit from on high?

One might describe the intellectual history of the world for the last two centuries, perhaps much longer, as a theme always but dominant recently, as the attempt to know without knowledge of God.   In schools there is the truncated imagination, wills not stabilized by allegiance to truth and its Author, but set free to patrol the pastures of banality and passion.  Politically, the consequence has been the proposal of fragments as systems and insights as absolutes, to the derogation of prudence and the forestalling of conversation.  In matters scientific, the consequence has been the vast and evident confusion in which capacities unimagined in the past wander the world seeking knowledge of the purpose and ends of these great powers, doing some good, but also sowing disorder.

The gift of God’s wisdom, of His Holy Spirit, makes straight the paths of those on earth, but without that wisdom and without that presence, the paths of humanity at best wander aimlessly and at worst lead to that cliff over which the demon-possessed swine have already passed. The secret of Christendom is not technology, law, or printing, but an unaccountable gift, given at Pentecost, disbursed through the world in baptism, given to the Church by promise, and as in the Old Testament, scattered throughout, blowing where He will, but only and always the gift that makes the path of those on earth straight.