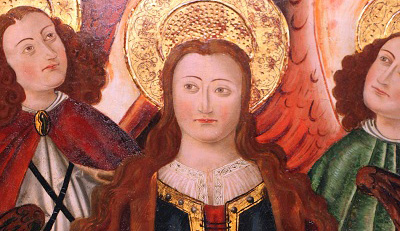 Thoughts on the Gospel

Strive to enter through the narrow gate,

for many I tell you will attempt to enter,

but will not be strong enough.

The word ‘inclusive’ has lately found a new career, migrating from a humble situation in which its most common use was “pages 9 to 12 inclusive” to center stage as a catchword of great power but ambiguous meaning.   It has presently taken up residence in the theological swamps of the progressive myth where it is used to obviate distinctions of every kind, from grammar to gender.  Meanwhile it has found a moral application as something of an antonym for rigorism.

But away with these confusions.  As it addresses the world, the Gospel of Jesus Christ is perfectly ‘inclusive,’ addressed to every man and nation by God who wishes all men to be saved.  While clear in its historical claims that salvation is of the Jews, it offers no encouragement to xenophobia.   Jonah was sent to Nineveh. The one who stopped to help the man lying wounded by the roadside, the grateful leper who returned to give thanks; these were Samaritans.   The Pentecostal flame burned over those of every nation (Acts 2:5–21).

And there is what might be called the socially liberalizing example of Jesus, who ate with Pharisees and sinners, seeming not to think that their sins precluded conversation.  And there is as well Jesus’  teaching that when we give a banquet we ought not limit the company to those who share our beliefs and our  circumstances and who will certainly repay the invitation, but include some who lie beyond that circle.   The poor and the maimed are exampled, but there will always be those less dramatic instances when one of the unwashed, or perhaps the less-watched, might be included to the praise of charity.

In all these ways, in apologetics, in the opening of the sympathies of the heart, the Church and the Gospels are ‘inclusive,” but in the deep theological sense the Church is exclusive and its politics discriminatory.  Its exclusivity begins with the protection of the Eucharist, which, while recognizing that it is a not a reward for the perfect but a help for pilgrims on the way, is reserved for the faithful baptized.   The earliest Church manual warns, “You must not let anyone eat or drink of your Eucharist except those baptized in the Lord’s name,” citing Matthew 7:6.  Saint Justin Martyr wrote at mid-second century, “This food we call Eucharist, of which no one is allowed to partake except one who believes that the things we teach are true, and has received the washing for the forgiveness of sins and for rebirth, and who lives as Christ handed down to us.”  And further, among the baptized, those who come must be free of soul-darkening sin, lest, as Saint Paul warns, they should eat and drink to their damnation.

And then in a theological sense the history of souls is a discriminatory process.  Our Lord says as much in today’s Gospel.   He is asked, “Will few be saved?” and this question opens a teaching for which the background is the contrast between Jesus’ stubborn contemporaries, for whom the way must be  narrow and their abilities weak, and the future of the Church at the end of the age.   when in Providence’s time, the door of opportunity will be shut, for many by death, by others by the coming of the Day, in the event some of those Jesus addresses may be left outside, but others will come from the East and West to sit down at table in the Kingdom with Abraham and the prophets.

The path into the kingdom is the hard way. The Gospels reveal mysteries, but they also posit paradoxes, of which the greatest is the truth that the hard way, which seems impossible to the world and very difficult for everyone else is the way of peace and fulfillment.   Our Lord put it most directly when He said:   He who would lose his life will save it, but who strives to keep his life will lose it eternally.    Our lives are like seed planted in the ground giving up their lives to the plants that will grow, and without that giving over to the way of the cross there is no growth, specifically no growth in holiness.  Now this hard way does not entail a rush to martyrdom; it begins in discipleship, which means discipline, which means duty, which means a life formed for success in the one thing that matters, living so as to please God.

We live in a world that is too often content with the second member of the great paradox:  the broad, easy way that leads to destruction.   Restraint is the natural human capacity on which the hierarchy that leads through duty to sacrifice is predicated.  Of all human capacities it is the most fundamental and the most essential, involving as it does not doing what I want to do now.  It was this natural principle that Paul wrestled with when, desiring to be holy, he wrote that the good he wanted to do came with difficulty while the evil he abhorred seemed easily achieved.   As we know, Paul’s dilemma was finally placed in the supernatural context of life in the Holy Spirit, so that Paul could say:  Thanks be to God who gives us the victory through Jesus Christ.               .

In a fundamental way Paul was experiencing what every human soul experiences as the claims of conscience conflict with our desires.   The classical world knew this tension and advocated the submission of the will in obedience to the natural virtues of prudence, justice, temperance, and courage.  This, imperfect as it was, was better than nothing.  But it lacked two things.   Its success is noble in a sense, the best intuition of the pagan world, was still an offering to self, indeed to one’s own pride, and its failures were ubiquitous.   It was the power of the Gospel to teach that genuine goodness relied not only on occasional triumphs of the will but more fundamentally on the renovation of the soul by the presence of God.  Throughout all human history there has in fact been one and only one new morality, and it is the morality of the renewed heart born at Pentecost, building on our natural desire to do good, perfecting that ability in humility and directing it toward the pleasing of God, not of self.  The narrow way is hard; Jesus says as much, but it is not walked alone, for the Holy Spirit, called advocate and comforter, sweetens every attempt to please God.  But the path that leads through the narrow gate is not a path for the weak of soul.

In this text from Luke 13:20–30 Jesus never answers directly the question, “Will few be saved?”   He does give His authority to the fact that many will lack the strength to enter through the narrow gate.  They will claim to know Jesus, to have been His familiar acquaintances, but He will not know them because they were evildoers.   But He also prophecies that many, from East, West, North, and South, will be saved.  There is a reward.  God, for whom all fatherhood is named, brings His children to Himself by teaching but also by feeding, and the moments in salvation always involve eating.  In Genesis we were offered the fruit of the tree of life which we declined in favor of rebellious knowledge, but it was God’s plan that we were to feast on life forever.  So often His motion toward us has been to share with us food that He has blessed with His presence and command.   Abraham our father in faith was blessed by Melchizedek the priest of most high God with the offering of bread and wine.   At the exodus God gave the paschal lamb, to be eaten entire, its saving blood spread on the doorposts and lintels.  In the wilderness He fed His people with manna from heaven (Exodus 16) and at Sinai when Moses and the elders “saw the God of Israel…they beheld God and they ate and drank (Exodus 24:9, 11).   Then on the night He was betrayed Jesus told His disciples that He would not share the supper that was His body and blood again until He shared it with them in the  kingdom He was about the purchase for them, and since that night salvation has come through sharing in the Eucharistic feast (Matthew 26:29).  And at the end the Angel says:  Rejoice and be glad, and give glory to Him, for the marriage supper of the Lamb is come and His spouse has prepared herself (19:7).  And in this day’s Gospel, the elect sit down at table with Abraham and the prophets.

We have not been given an exact picture of the end of all things.  We have a kind of census in Hebrews:  innumerable angels, the assembly of God’s first-born Israel, God the judge of all, the elect spirits of just men made perfect, and Jesus the mediator. So we know something of the company that will be gathered around the throne at the great consummation.   We know that the natural order will be renewed, as in Revelation 21and 22.   And we know that everyone who by grace has been strong enough to enter through the narrow gate will be there.   The Church does dare on the evidence of holiness of life and miraculous signs to say that a few heroes of the faith are in God’s presence, but with this hopeful exception the names written in the Lamb’s Book of Life are not known in this world.   We are however told to be prepared for surprises at the hands of  God who sees hearts:  “Some who are last will be first, and some who are  first will be last” (Luke 13:30).