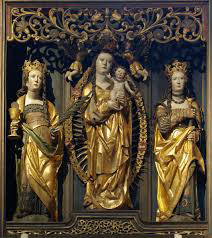 His flesh became again like the flesh of a little child….  He stood before Elisha and said, “I know that there is no God in all the earth, except in Israel.”

The readings for this Sunday contain two dramatic examples of requests answered.  Naaman, afflicted by flesh-destroying leprosy, was healed by bathing seven times in the Jordan as Elisha had commanded.  Naaman tried first to make a gift to the prophet, but when this was refused, in gratitude he vowed to offer sacrifice to no other God except to the Lord.  The Gospel reading tells the story of the healing of the ten lepers (Luke 17:11–19).  As Jesus journeyed towards Jerusalem, they cried out, “Jesus, Master, Have pity on us.”  Told to show themselves to the priests, they were cleaned on the way.   The response of the ten lepers, of whom only one returned to give thanks, was very different from the response of Naaman, who having seen God’s work in himself, vowed never to worship any other God except the Lord.   But the common fact is that God acted in their behalf.

What God did for Naaman and the lepers is called in English a miracle, which translates the Greek sēmeion or ‘sign.’ The word ‘sign’ is almost exclusive to the Gospel of John, where it describes the transformation of water into wine, the healing of the man born blind, and the resurrection of Lazarus.   Indeed the narrative portion of John, Chapters 2–12, has been called the book of signs.

The Church has ever rejoiced in the existence of such signs, so that typically the claim to the sanctity belonging to one believed to be in the presence of God is verified by the occurrence of miracles wrought through the intercession of that saint.   And further, a deep look into any life is likely to reveal gifts that will be thought of as miraculous; we will look at our lives and upon reflection say, even if the event was not a dramatic cure or reversal of fortune, that this was miraculous, attesting our awareness that God has done something for us that seems to stand above the ordinary expectations of nature and time. And in an even broader sense there is something of the miraculous in the sacramental life of the Church, in the gracious offering of Christ’s body and blood, in the gift of baptism, and in forgiveness.  If the definition of ‘miracle’ is an event in which God by anticipation lifts some necessity rooted in the pain-ridden and uncertain life of this fallen world into the healing that belongs to the wholeness and perfection of the life of the age to come, then the sacramental life is indeed miraculous.

Such occurrences are too numerous and ‘ordinary’ to require enumeration.  Perhaps the most pervasive result of the elevation of nature by grace is the intermittent and fragile appearance of something that may be called Christian civilization, the presence to some degree of a gentled world created by the impress of the actions of Christians upon time and place.

All these participate in the grace that is miraculous, that healed Naaman and the ten lepers.  But these gifts are appropriated by faith.  It is their character that they may or may not tend to the conversion of the world in which they occur.   There are always those who when a voice from heaven speaks conclude that it thundered. And God’s ways of working in the world are not those that the world can see.  For miracles require a context of faith; addressed as they are to a heart that is willing to listen.   And the miracles of Jesus were most often private, never addressed to the public, the work of one who asked His disciples not to publicize who He was or what He had done.  The beast that tempts the world to worship his power overawes and binds with that same power (Revelation 13:11–18).  Christ, until He returns in glory, engages the world with unyielding witness and with quiet, effective love.

This has never impressed the sign-seeking world.  The Scribes and Pharisees came to Jesus with the request, “Teacher, we wish to see a sign from you.”  And Jesus replied that no sign would be given them but the sign of Jonah, that is preaching (Matthew 12:38–39).   When the rich man in hell pled that if Lazarus risen from the dead were to warn his brothers, they would repent, Jesus replies that they knew what righteousness would be.  They had Moses and the prophets; if they would not hear Moses, then one raised from the dead would not persuade them of their danger.  Signs are ineffectual apart from faith.   God does however have other ways of getting results with the faithless.  Pharaoh was not persuaded to let the Israelites go until He visited Egypt with plagues that turned the Nile to blood and overran the land with frogs (Exodus 11–13).

But just as we may find it difficult to engage the signs He gives with faith, it is possible to misread God’s action in history as we look at it extrinsically, from outside. Are times of peace  and comfort signs of divine approval, or may they not on occasion represent God’s abandoning us to our own desires?   And may it not be that times of danger and discomfort are given to us for the making of our souls in patience.  And how would we know which is blessing and which  chastisement?

The answer is that the meaning of events is not written upon them.   There is an objective sense in which destruction and penury are bad and peace and plenty very good, but the moral value these events have is a work of discernment that finds its fruition in the way we engage them.   Although in a cosmic sense good times and bad times may simply be part of our confusing world, God has given them to us in order to get results; the result being the perfecting of our souls as we make our way through the world, knowing that what befalls to us is not mere happenings, but gifts of His providential good will.

His brothers first intended to remove the irritating Joseph by dropping him into an empty cistern, but later sold him into slavery (Genesis 37:25–28).  When it was all over, when Joseph had become the chief man in the land, when he had averted famine, when he had forgiven his brothers, he said, “You meant evil against me, but God meant it for good, to bring it about that many people should be kept alive” (Genesis 50:20).