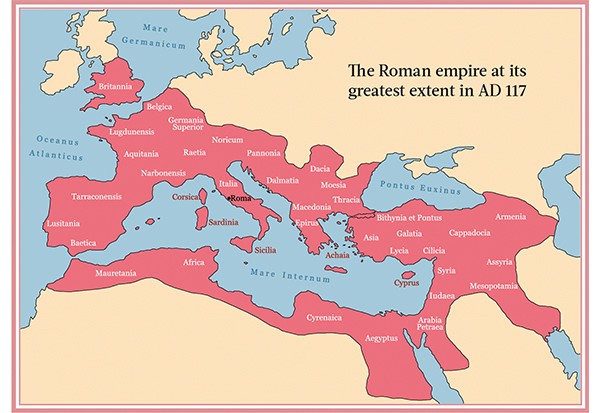 To begin with a thesis that is not popular.   There will always be an empire, now perhaps more than one, contending for military and ideological or better cultural supremacy.    The Roman Empire, Christian since the third century, made the world we inherited.   Its rule extended from the Euphrates in the East to Hadrian’s wall across the neck of Scotland and from the Rhine to the Sahara. It inherited the idea of freedom we associate with fifth century Athens.  It was free in the sense that its citizens were pretty much left alone, perhaps this was partly because the state had such limited information and such limited instruments of coercion.  But in any event there was freedom, unless you were a slave.   The empire would have left Christians alone if they would have acknowledged the supremacy of the state, which seemed obvious to Romans, and within which broad cultural requirements citizens were, as above, left alone.  What destroyed the Roman empire remains a question and an argument.   That Christianity was the culprit is unlikely; even under persecution their loyalty was impressive.    More probably they followed the classic pattern:  fiscal profligacy, debased coinage, inability to defend the borders, dilution of the will to fight in a stew of internal politics.  They forgot, or could not sustain, the fact that continuing to be successful means continuing through military means to defend against the enemies at the borders.   The Persians in the East and the Goths in the north were suppressed but never defeated.  The war with Carthage was the only ideological or partly ideological war; the Romans hated the religion of the Carthaginians.

The Christian Roman empire morphed into the empire of Charlemagne, roughly the same territory minus Africa and Spain which had gone to the Muslims and Britain which after the legions were withdrawn in 410 had slipped back into a kind of tribalism of chaos and petty kingdoms.

The Carolingians empire then became the Holy Roman Empire of the German nation, which existed in one form or another until 1808 (Napoleon) or 1919 (Woodrow Wilson), Britain and France and Spain lying outside its geographical borders but within  a common field of ideas.

Meanwhile the Spanish, French, and English contended from imperial success in the New world. With Spain and Portugal successfully colonizing South and Central America, England North America, while France gave up the enterprise, leaving behind cultural victories such as Quebec and Haiti.

The eighteenth and especially the nineteenth century saw the efforts by European states to colonize Africa and Asia, especially southeast Asia.   In the eighteenth century England emerged as the world empire, while Spain gently declined, leaving behind an impressive cultural heritage in Spanish-speaking South and Central America and in the United States.

What all these empires at their best have had in common is freedom under the rule of law.  There are degrees of freedom.   Many south and central American states would be ranked “partly free,”  But it is a defensible generality that freedom under law has grown up under the shelter of Christianity, and the corollary that when Christianity fails societies descend first into reliance on positive law and then fall into tyranny or chaos.    A part of this freedom has been the right to be left alone with the corresponding duty to be responsible for one’s self.

Beginning in 1900 with the defeat of the Spanish Empire the United States set upon the road to become the world empire.    We have always protested that we did not intend to be a world empire.    But that is what the United States is.   I will digress to point out that since the seventies, with the Viet Nam debacle, the United States has been increasingly restive under the imperial burden.   Defeated in VietNam.  Uncertain in Iraq.   It is hard to believe that, having given up the political position by adopting the one China policy, the United States is prepared to go to war over Taiwan or for that matter the Crimea.    Not to suggest that such wars would be a good thing, but unwillingness to defend one’s allies is the hallmark of imperial failure.    Just so the suppression of violence in the Middle East, especially Afghanistan, which we are preparing to leave, is a sign of failure.  US troops are not in Afghanistan to win a war against the Taliban, which, given their support in Pakistan, is probably impossible, but to suppress the Taliban and at a great cost in life and treasure to secure a forward position.

Similarly troops in Germany and Korea are not there to fight a war but to provide a counter force to Russia and North Korea.   One cannot imagine the Roman Senate debating the removal of the legions on the Rhine because they have been there a long time.  The legions were at Hadrian’s Wall for three hundred years and when they were withdrawn Roman Britain quickly ended.  The fact is that the United States faces every day the temptation to give up its imperial role on the grounds that it is burdensome and expensive; and surely all nation states will  live peaceably together under the rule of law.    How this is to be decided is still undetermined at this writing.

And there is this.   Empire building from Rome to the present has always been the work of states whose normal formation was that of Christendom, with Christianity being the ultimate, if unacknowledged,  cultural steam.   The pressures have always been from without.  Now there is the threat of dissolution from within.   Great writers, political and theological, from Justinian to the 1500s, almost universally insisted that the glue that held the state together was love and friendship.   This is not easy to imagine in fourteenth century Florence but in any event Christianity was assumed.    There have been rebellions of one class against another; occasional servile wars, the peasant rebellions of the 1500s for example, but they have not carried public opinion with them.   This was, one suspects, in part the result of two doctrines.     The doctrine of providence which is the most significant conveyor of contentment, teaching us all that we are where God had put us. And the doctrine of the symbiotic roles of the rich and the poor, it being the duty of the rich to relieve the necessity of the poor and the duty of the poor to pray for the rich.

In the nineteenth century, perhaps under the power of the abstractive themes of the industrial revolution these doctrines weakened to the point of irrelevance.  And then the Devil steps in with class hatred.   I wonder if the hatred was real or if it was mostly just a theory.  At least in the Anglosphere it is hard to find cases of full-blooded hatred of the poor for the rich.  But be that as may be, hatred, marching at first under the banner of justice, was the doctrine of Marxism, which framed itself as the defender of the proletariat.  In fact the only culture that has ever done much for the proletariat is the liberal capitalism of the late nineteenth and twentieth centuries while every Marxist regime became a prison, from which millions escaped.    Five thousand Nicaraguans leave every day,  Finally, flight is prohibited as in Cuba.   As in East Germany, where a wall was built to keep the population captive.   As a populist movement Marxism is a dismal failure, for without the police power, exercised by a corrupt intelligentsia, it always fails.   North Korea and China are vast prisons.   In its perfected form there is always Orwell’s five minutes of hate in some form, soft or strident.

But hatred has its ways, and now its program is, in the United States, to generate hatred between the races, building on the fact that retrospectively slavery is recognized as unjust, using the equality doctrine, interpreted in economic and political terms, to bring down the civilization, with thugs enlisted as the foot soldiers of neo-Marxism. The name of the system is critical race theory.     Its auxiliary is the alleged climate crisis, in which what should be of some concern is magnified into apocalyptic proportions,  which has grown men under the inspiration of political purposes  believing that the world will end in what must now be a mere ten years.   And not to be forgotten is the middle class sop that enlists millions of women and men in the cause of the destruction of the unborn.  People who will do this have already, perhaps unconsciously,  passed into the precincts of lawfulness, of which the broad attack upon language and nature are symptomatic.  The characteristics of these movements is a kind of lawlessness stoked and fired by a  ‘Puritanism’ or fanaticism in which, as in progressivism generally, the goal is theoretical or elusive so that there can never be enough equity or enough suppression of greenhouse gases.    There will never be enough destruction of language.   Ultimately, such things are made possible by the descent of the West into reliance on nothing more compelling than positive law, law which is enforced by no authority higher than the power of the state.

These things have as their end game the destruction of the empire of freedom under law because they recognize no law.   Law that is merely positive will not fight.  And in the end there is no will to defend what I have called the empire of freedom.   An army that in its higher ranks is increasingly not a fighting force but an instrument of social change, in which the criterion of  success includes  the number of women and minorities in command positions,  can only with difficulty and improbability be set to oppose China when it strangles Taiwan or Russia when it lops off another piece of Ukraine.

Various agencies rank nations according to the existence of freedom in their borders.   The criterion is apparently complicated and not often published.    Out of about 150 the United states usually ranks in the forties.  Germany and Canada both rank higher than the United States.  But Germany is a place in which you cannot educate your children yourself at home.  Canada is a place in which if your twelve year old has decided it is of a different sex you may go to prison for refusing to refer to that child by his chosen gender.   One wonders what the rankings would be if the criteria included the ability  to educate one’s children  outside the government system.   Not in Germany. Not in Sweden.  In France only with difficulty.   In Canada only with permission.  In New Zealand only with the approval of the Board of Education.

According to a respected study, only about fourteen percent of the earth’s population is free.  This seems impossibly small until one remembers the population of China and southeast Asia.  The question must be: is this country and the cultural similitude it shares to some degree with some intellectual pockets in Europe, South America, and Africa the last incarnation of the empire of freedom?