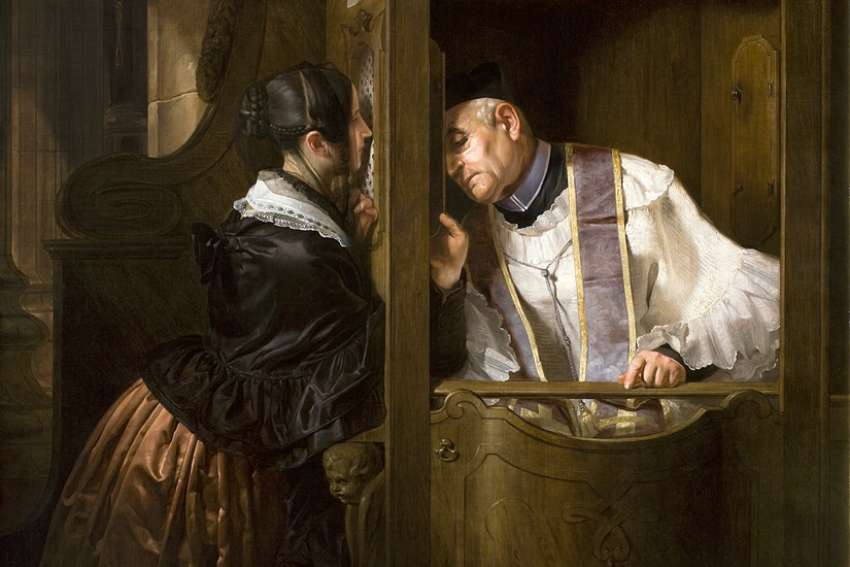 Jesus said to them again, “Peace be with you.
As the Father has sent me, so I send you.”
And when He had said this, He breathed on them and said to them,
“Receive the Holy Spirit.
Whose sins you forgive are forgiven them,
and whose sins you retain are retained.”

The first Sunday after Easter, the eighth day that completes the octave of the feast, has come to be known as Mercy Sunday, the day on which the Church hears the command of Christ that His apostles, empowered by the Holy Spirit, should have the power to forgive or retain sins.     After the great sacrament of baptism, the ability to absolve (or not) is the greatest power the Church possesses, a power rooted in the declarative power of Christ’s promise to Peter (Petros) that he would be the rock (petra) on which the Church would be built (Matthew 16: 18-19).   It cannot be overlooked that Christ’s promise to Peter follows upon Peter’s God-inspired witness that Jesus is the Christ, the Son of the living God.  Just as Peter’s witness is not a thing of flesh and blood but a gift of God to Peter, Christ’s gift to Peter was not made in any recognition of Peter’s excellence     Immediately after receiving the gift of the keys, Peter, displaying the obtuseness characteristic of all the apostles before Pentecost, denies that Jesus must suffer, causing Jesus to call the prince of the apostles Satan.

Christ followed the famous ‘rock’ passage with the promise that the gates of hell would not prevail, would not stand,  against the apostolic power of the Kingdom of God, a promise fulfilled in one way when Christ descended to the place that embodied the lost past, to set free the prisoners in chains of all times and ages (I Peter 3:19-20) and in another way when it  became clear that Satan’s usurped reign on earth could not withstand the power of Christ’s mercy and grace, His will that the apostolic mission should set His people free from the chains of sin.   This power to restore sinners to a right relation with God, setting them free from a sinful past, restoring their baptismal innocence, is a divine power more important than any power, economic or military or demonic that the world, the flesh, and even Satan can command, for none of these can change the past and secure a promised future of blessedness forever.   This is the power symbolized by the gift of the keys to Peter, exercised by men called by God, and commissioned by the Church, empowered by the Holy Spirit, who through  the exercise of their ministry have the ability to open and to close the door to salvation, to set free from the bondage of sin and to withhold forgiveness from to those who come to confession seeming neither to have any degree of love for God and so to hate their sins or those who do not even fear  hell—if such exist.  Jesus resurrected in glory first visited His apostles to give this command; He breathed on them and said , “Receive the Holy Spirit.  Whose sins you forgive are forgiven them.”

The practice of the merciful power of the keys, of the ability to know the forgiveness of sins at the hands of another person, a priest who presumes to act on Christ’s behalf, known and valued, indeed cherished, by many, has fallen out of use among others.    Superficial objections that all share can be dismissed shortly.   It is not only humbling but, truth told, embarrassing to recite one’s sins to another person, even when one has confidence that this is the path to setting oneself right with God.  The sins that burn for absolution are not climate change denial and abstract racism but the sins of greed, lust, cowardice.   It would be bizarre to fear embarrassment before another person, divinely empowered or not, but to believe that one could stand tall before the judge eternal with a soul bespattered by those same embarrassing sins.

But it may at least be suggested that there is another reason why the confession that belongs especially to this season of mercy seems a bridge too far and that is the pervasive denial, as it were in principle, that reality is always mediated.  Members of the Old Church, Easterners, some Anglicans and Lutherans live in a mediated world in which Christ is the one essential but not the only mediator, for there is the Blessed Virgin (Pray for us now and at the hour of our death) the Saints, the angels (through whom creation is governed, our guardian angel) and the whole body of the praying and sacrificing faithful on earth, each and all of which may play a part in our salvation.    None of these is of the slightest efficacy without the cross and resurrection of Christ, but the power of His merciful heart beats through each of these mediators and we are bound to each by the love of Christ they reflect.

This is not the spiritual world most Christians of the Anglo-sphere inhabit, where it would be the proud assertion that believers need no one standing between them and Christ.    Another track might be to be grateful to anyone who, commissioned by Christ Himself could be found to undertake that dangerous position.   A priest who undertakes to fulfill that role has zero salvific power.   He can, having been chosen and sent, defeat evil, enter and ransack the kingdom cringing behind the gates of hell, by judging sinners worthy of absolution or complete forgiveness, assigning a penance, and pronouncing sins forgiven, their guilt done away, with the authority of Christ himself.

Such forgiveness has a price, and the price is two-fold.   The first is that mother of every virtue, humility.  There is nothing as deceptive as the picture of oneself as basically a good person whose failures are to be explained by circumstance or environment.  The second is the hard-won ability, perhaps always imperfect, to know one’s self, to be able to understand which false virtues are screeds for real sins; which spiritual difficulties are dispositions, natural or acquired that must be borne, and which moral anxieties, however worrisome, are  failures of faith, when sorrow may be no more than disappointment that one has betrayed one’s presumed good character, which sins are rebellions against the divine will, which failures are misunderstood occasions for gratitude.

One way to understand the rancor that taints  post-modernity is to consider that much of this belligerence and hard-heartedness is the consequence of sin unacknowledged and unforgiven and the subsequent effort to see and defend oneself as good enough without God.   This latter is the sin of pride through which Lucifer fell, and this conviction that one needs no forgiveness is the foundation of our unwillingness to forgive others.    This closed-heartedness, while it leads those thus afflicted to eternal loss,  infects public discourse and education.  The beginning of a cure is the knowledge that we are not, none of us, good enough for God, that we each and all need the forgiveness Christ offered in John 20:21.