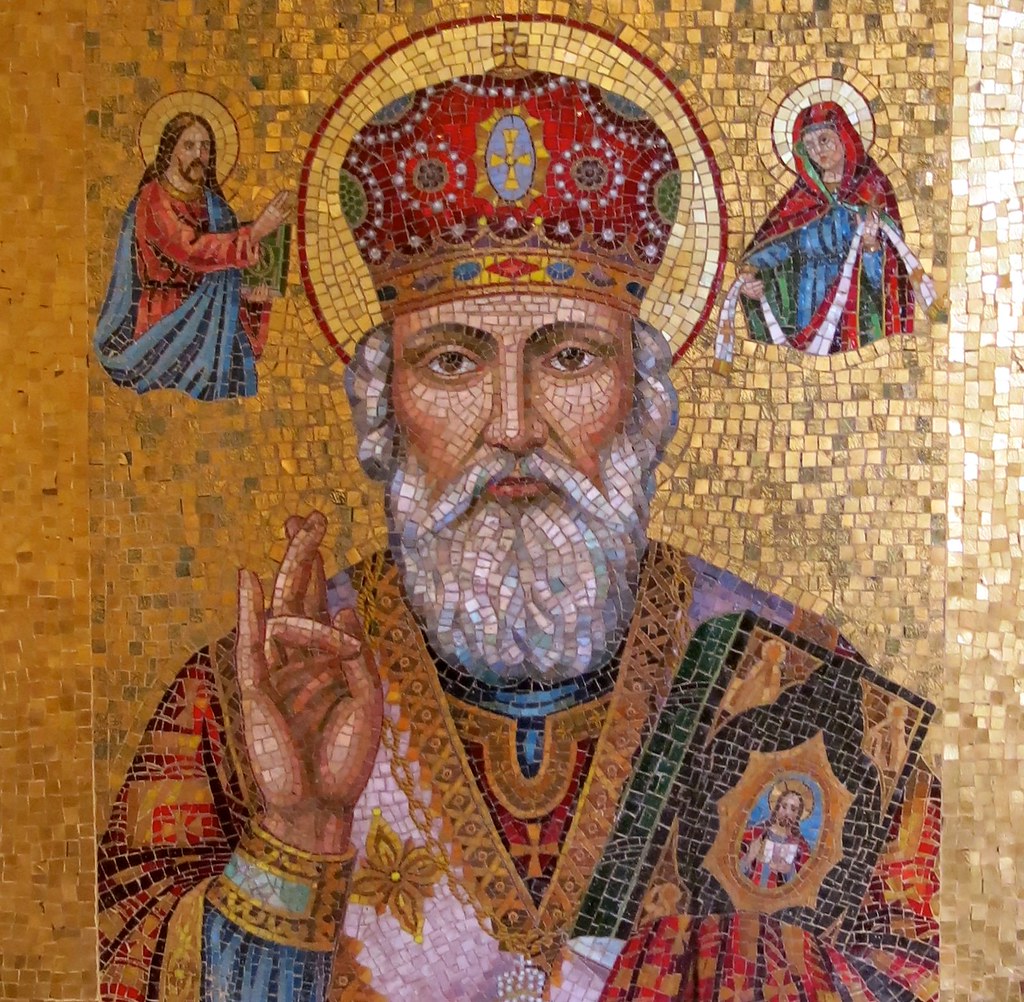 Wherever there is a living religion it will influence the popular culture.  The notion of gentling the culture, in that specific language, belongs, I think, to Leo XIII, and was used by him to describe the situation in which Christianity, while it elevates souls directly through conversion touches and elevates the general culture indirectly by the tendency of that culture to engage the customs and themes of religion at a popular level.  Where there are Italian Catholics there still will be processions of the statue of the Blessed Virgin or the local saint, held shoulder high, amidst showers of sparklers and fireworks. Where there are English-speaking Christians there will be Santa Claus and more recently Lessons and Carols. In Czechoslovakia there has recently been objection to Santa Claus, on the grounds that their tradition insists that presents are delivered by Baby Jesus.

One of the first and most persistent incursions of Christianity into popular culture involved and still involves the rhythm of time. The Christian calendar is rooted in Jewish practice and in the Roman calendar, while reflecting as well the natural cycle of the seasons.  Over time the Roman week of eight days was replaced by the seven-day Christian week borrowed from Judaism and Genesis. Easter, the first and still-greatest Christian festival, set the Passover, as it were, in a new key, and after a period when it was celebrated (at least in Asia) on the fourteenth day of the Jewish month Nissan, its date was determined by astronomical calculation. In Rome the new year traditionally began in March, the season of nature’s regeneration. The tradition that Christmas was to be celebrated on December 25th dates to the third century.  [I am reminded of the (to us) odd custom of reciting the date of Epiphany and (I think) Easter at the Christmas midnight Mass.]  In the Middle Ages March 25, was New Year’s Day as well as the Feast of the Annunciation to the Blessed Virgin Mary by the Angel Gabriel, or Lady Day. Nine months after March 25 is Christmas, the celebration of the birth of the Lord, which falls upon or near the December feast of Saturnalia, a time of feasting and gift-giving.

Hippolytus wrote about 204 in his Commentary on Daniel that Christians esteemed December 25 the birthdate of Jesus and March 25 the date of the great sacrifice, or the Easter celebration.  None of this was rationalized until the scholarship of Dionysius (470–554), a Scythian monk called Exiguus, “the humble”, in his work Anni Domini nostril Jesu Christi 532–627 gave the Christian world a calendar that for the first time counted years from the birth of Christ, a task Dionysius undertook because he “preferred to count and denote the years from the Incarnation  of our Lord, in order to make the foundation of our hope better known and the cause of the redemption of man more conspicuous.” This has proved a challenge to secular scholarship, which prefers BCE (before the common era) and CE (Common Era) to “Before Christ” (BC) and AD (Anno Domini, the year of our Lord).   However one does it, unless willing to redate every event, the dividing point is still the life and death of Jesus Christ.

The relation between the Roman feast of Lupercalia, celebrated in early February, involved the (unusual) sacrifice of a goat and a dog, whose blood would be smeared on the Luperci, who then would run a race. The Lupercalia was still celebrated in 494 when Pope Gelasius I banned it and substituted the Feast of the Purification of the Blessed Virgin.  Because the Lupercalia was the merriest feast of the year, a time of gift-giving, there is always the thought that some relation existed between that Roman festival and Christmas, but the date of Christmas seems to have been determined by factors distinctly Christian.

The influence of Christianity on the calendar was small stuff in comparison to its moral influence in the general culture, especially on the customs and rules regarding marriage.   The Church tried persistently to suppress abortion and infanticide and in general succeeded. The church also attempted with some success to make divorce illegal, resting its case on Matthew 19 and Saint Paul’s analogy relating the indissolubility of marriage to the relation between Christ and the Church.

Not the least influence of Christianity was the coopting of the chivalry into what one might call a quasi-religious vocation, especially evident in the crusades.

The preparation for a knighting (or dubbing as it is sometimes called), which might include any number of knights-to-be, began the day before, with the squire brushing himself up with a bath and a shave or beard trim. Overnight he might spend the hours in a vigil within a chapel with his sword resting upon the altar. . . . On the day of the ceremony the squire was dressed by two knights with a white tunic and white belt to symbolize purity, black or brown stockings to represent the earth to which he will one day return, and a scarlet cloak for the blood he is now ready to spill for his baron, sovereign, and church.  The newly made knight was given back his sword, which had been blessed by a priest with the proviso he always protect the poor and weak. The blade had two cutting edges – one to represent justice, the other loyalty, or more generally, chivalry. The squire was actually knighted by a simple tap on the shoulders or neck with the hand or sword, or even a heavy blow, meant to be the last blow he should ever take without retaliating and to remind him of his obligations and moral duty not to disgrace the man who dealt the blow. A few words might be said but nothing too fancy, perhaps a simple ‘Be thou a knight.’

One of the projects of knighthood was the maintenance of the Peace of God. Robert the Pious (996–1031) espoused an oath that instantiated the peace of God, which while never effectively maintained offered some respite from the incessant wars of the Middle Ages.

I will not infringe on the Church in any way. I will not hurt a cleric or a monk if unarmed. I will not steal an ox, cow, pig, sheep, goat, ass, or a mare with colt. I will not attack a villain or villainess or servants or merchants for ransom. I will not take a mule or a horse male or female or a colt in pasture from any man from the calends of March to the feast of the All Saints unless to recover a debt. I will not burn houses or destroy them unless there is a knight inside. I will not root up vines. I will not attack noble ladies traveling without husband nor their maids, nor widows or nuns unless it is their fault. From the beginning of Lent to the end of Easter I will not attack an unarmed knight.

While these large aims were being pursued as derivative manifestations of Christianity in popular culture, the popular culture itself was recruited into the Christian cause through the mystery plays and through the magnificence of the liturgy.  And one might remember the guilds, an organization of artisans conceived as having the religious purposes of mutual support and dedicated to maintaining the standards of the craft, its activities typically aranged around a patronal festivals. Often the guild would have a church such as Raphael’s Sant’ Eligio degli Orefic, built in 1509 for the goldsmiths of Rome.

Christmas was of course a liturgical celebration required as the Feast of the Nativity by the Roman missal and the English book of Common Prayer.  Puritans did not like it, attributing its origin to paganism or Catholicism, and in the Cromwellian years of mid-seventeenth century, its celebration was illegal.  This was the Puritan tradition inherited by Massachusetts. When the Reverend Charles Coffin travelled south about 1800, he encountered as an oddity the celebration of Christmas in Virginia.

To skip to the nineteenth  century, the secularization of the two greatest Christian festivals brought an increasingly secular culture face to face with the fact that it had no cause for celebration that was not ultimately rooted in the Christian story.  One might suppress “Christmas” in favor of “holiday,” but a holiday is nothing but a holy day, and the giving of gifts is derived from Saint Nicholas, whose feast was December 6th. Santa Claus is Saint Nicholas.

In  1821, the book A New-year’s present, to the little ones from five to twelve was published in New York. “It contained Old Santeclaus with Much Delight, an anonymous poem describing Santeclaus on a reindeer sleigh, bringing presents to children. Our modern idea of Santa Claus was encouraged by the anonymous publication of the poem “A Visit From St. Nicholas” (better known today as The Night Before Christmas) in the Troy, New York, Sentinel on 23 December 1823; Clement Clarke Moore, a professor at the General Seminary in New York,  is reputed to have written it while on a shopping trip by sleigh.”  St. Nick is described as being chubby and plump, a right jolly old elf with a little round belly that shook when he laughed like a bowlful of jelly.   The reindeer were named: Dasher, Dancer, Prancer, Vixen, Comet, Cupid, Dunder and Blixem, the last two of which were later changed to the more German sounding Donner and Blitzen.

Santa Claus lost his character as a Christian bishop and became childhood’s delight and a commercial property, first of New York merchants and then of the country, but he remains the symbol of love and generosity.  And if the world is a bit gentler; if almost everyone gets a day off for the purpose of eating themselves silly and talking with family, this is attributable to the ability of Christ to gentle civilization. The pope chose his words well because the Church does not propose to create a Christian civilization.  It asks the right to be itself and to tell its story, which makes the world a better place, not in the sense of some cumulative progress toward a historical utopia but by way of gentling a culture that without its elevating touch will become coarser by the day. And of course at Christmas stores make money, recouping the dry mid-summer months; and that’s a good gift too.