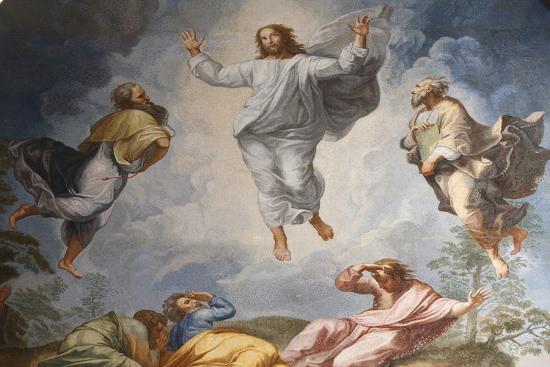 This man God raised on the third day and granted that He be made manifest,
not to all the people, but to us
the witness chosen by God in advance,
who ate and drank with Him after He rose from the dead.
He commissioned us to preach to the people
and testify that He is the one appointed by God
as judge of the living and the dead

The resurrection of Jesus of Nazareth was a one-time event that altered the horizons of human possibility forever.  God’s witness that Jesus was alive in glory after being put to death was an event that occurred over many days.  The first witnesses were women, some of whose names Luke carefully remembered, Mary Magdalene, Jo-Anna, and Mary the mother of James (24:1–10); He then appeared to Peter, to James, and once to over five hundred people (I Corinthians 15:6).    His standing again, for that is the meaning of the Greek, being present once again to his disciples after being crucified under Pontius Pilate was not a sign given with great power as at Pentecost, seen by all Jerusalem, nor was it a wonder done before the crowd in the marketplace or the forum.  God’s purpose in raising Jesus from death was not to convert the unbelieving but to confirm His disciples.  His appearance before the world in glory, when every knee shall bow and every tongue confess His lordship (Philippians 2:10–11), an event reserved for His appearing at the fulfillment of the ages, would have violated the divinely appointed limitation:  He would not use the obvious and the incontrovertible to elicit faith.   So His appearance was not to all the people but to the witnesses He had chosen beforehand.  To them it gave great assurance, validating everything He had taught, while it convinced the doubtful (John 20:24-29).

The forty days between Jesus’ resurrection and His ascension to the right hand of the Father saw the completion of His work.  During those days He appeared to  the twelve to command them to forgive sins (John 20:19-24).  He explained the Scriptures on the road to Emmaus to His disciples:  “O foolish men,  slow of heart to believe all that the prophets have spoken” (Luke 24:25).    And afterward they knew Him in the breaking of bread;   they recognized him, He ate and drank with them, first having blessed bread and broken it in anticipation of the sacrament of His body and blood (Luke 24: 31-35).  He spoke to the Twelve of the Kingdom of God (Acts 1:3).  His resurrection was the sign that in Him that last enemy death had been defeated.   In His appearing to His chosen witnesses He  gave His disciples a foretaste of the world to come, for He appeared bearing the sign of God’s glory.  John wrote: “We beheld His glory, the glory belonging to the only Son of the Father” (John 1:14 ), a glory predicting for the faithful their future life with Him in glory.

But none of these good things was the one thing that the apostles remembered as the result of Jesus’ resurrection.  What the appearance of the living Lord to His followers but not to the world did was to set the apostolic ministry on the road with this message:  “He commanded us to preach to the people and to testify that He is the one ordained by God to be the judge of the living and the dead.”   And the Gospel of John assures us that it is  not the Father but the Risen Christ, He who knows intimately the human nature He has taken to Himself who will be our judge:  “For not even the Father judges anyone, but He has given all judgement to the Son” (5:22).   That this is the divine witness given in Jesus’ resurrection  from death is reiterated later in Acts:  Paul ends his apology to the council of the Areopagus with these words:  “In the times of this ignorance God winked at; but now commandeth all men everywhere to repent:   Because He hath appointed a day, in that He hath raised Him from the dead” (17:30–31).

The resurrection is God’s promise that Christ will judge the living and the dead, which is to say that, among other great realities established by Jesus’ vindication, life has moral meaning assigned it by God who created it, that in the end goodness will be established and rewarded and evil done away and punished.   This truth, that God will judge in the end, is a theme reiterated in the Psalms, whose authors do not envision a world uncorrected.   It was prophesied by Christ himself: “When the Son of man comes in His glory, and all the angels with Him, then He will sit on His glorious throne.  Before Him will be gathered all the nations, and He will separate them one from another. . . .  Then He will say to those on His left hand, ‘Depart from me, you cursed, into the eternal fire, . . . but the righteous into eternal life” (Matthew 25:31–32. 46).

This Easter the world will celebrate the resurrection as the sign of Christ’s triumph over death, and rightly so.  Not so much attention will be paid the truth that the apostles considered of first importance:  Jesus’ vindication by the Father makes Him the King Eternal to whom it belongs to judge the world and its people, the living and the dead.   Judgement is not a popular topic in a world in flight from God; being judgmental, which is often simply calling evil by its proper name, is now a secular sin, but that does not change the good news that God’s “justice will roll down like waters, and righteousness like an ever-flowing stream” (Amos 5:24).

Every Christian should anticipate his or her judgement with profound and holy fear.   But also with confidence.  The world we see in which evil seems omnipresent if not triumphant , and every soul who has ever lived and acted for good or evil in it, all will be judged so that goodness will be established.   This is a cause for Easter joy.  We would not be happy in a world in which water ran uphill, in which we were constantly vexed with having to pry our chairs off the ceiling.  These laws of nature are dim reflections of  the divinely appointed order of the world called divine justice, seemingly trivial in the light of the great truth that no good will go unrewarded, no evil unpunished.  Because Christ resurrected is the judge eternal we  need not concern ourselves more than prudence demands that evil seems so persistent, with defeating evil in the world.  We know because we are Christians that the theory of German philosophers and progressive politicians that human nature is inevitably improving is a lie.   One of the great marks of human equality is the fact that we all, each of us,  have an opportunity to do good or evil.  The Lord himself (Matthew 25), Saint Paul (II Thessalonians 2:3–10), and the Apocalypse of the prophet John tell us that the world and its inhabitants will become worse at the end, when God will at last set all  things right. And remember; that judgment means vindication for those who love His coming (II Timothy 4:8).   To them He will say, “Well done, good and faithful servant, enter into the joy of your Lord” (Matthew 25:21).  And says the Apostle James: “Behold, the Judge is standing right at the door” (5:9).