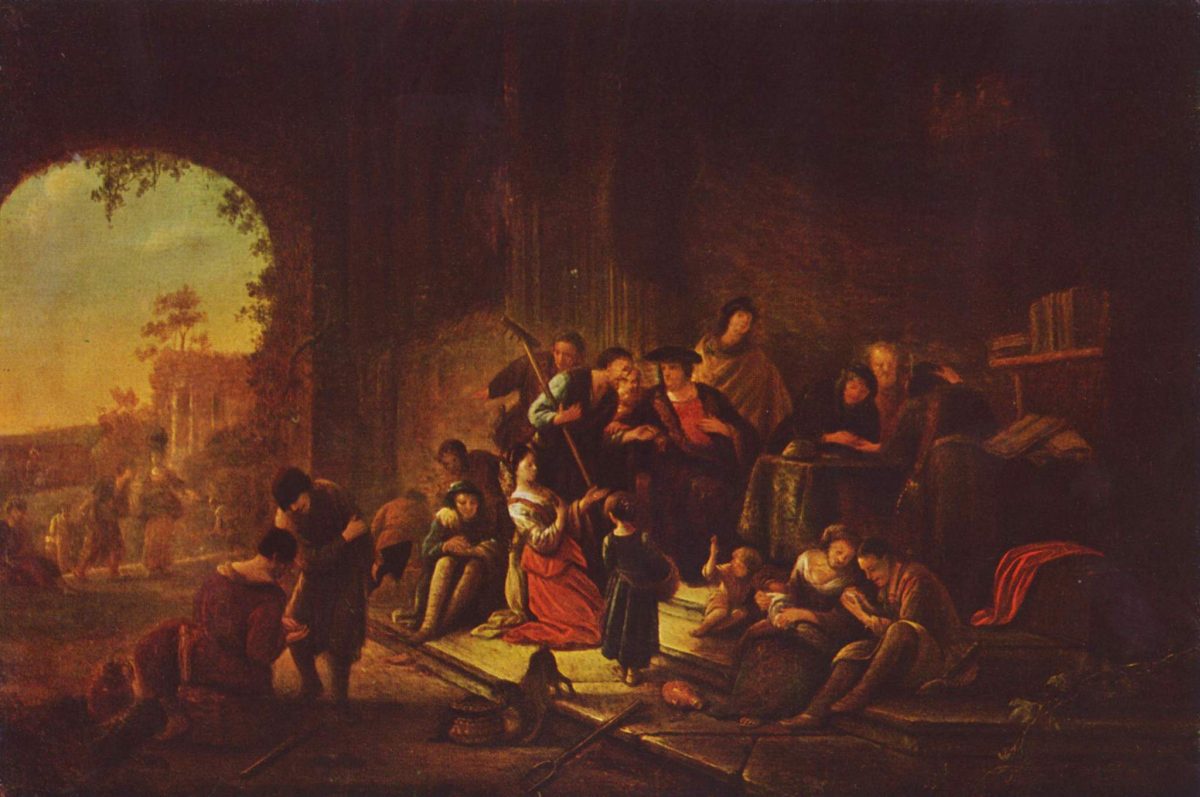 “These last ones worked only one hour,
and you have made them equal to us,
who bore the day’s burden and the heat.’
He said to one of them in reply,
‘My friend, I am not cheating you.
Did you not agree with me for the usual daily wage?
Take what is yours and go.
What if I wish to give this last one the same as you?
Or am I not free to do as I wish with my own money?
Are you envious because I am generous?’
Thus, the last will be first, and the first will be last.”

The Parable of the Workers in the Vineyard, like every parable, has many meanings.   One surely is to make the point that God’s mercy may be extended to us early or late, with the subsidiary thought that jealousy of those upon whom God most unaccountably, in human terms, has mercy is at all costs to be avoided.    The vineyard and the grace to call us into it belongs to God alone.   He  may do as He wills with His own. It is a characteristic of the Biblical account that while it is possible, as with the foolish wedding guests, to delay too long (Matthew 25:5), and while we are warned not presumptuously to ignore opportunity for repentance (Hebrews 3:15), the overarching theme of the Scriptures is God’s willingness to welcome us whenever we will come.

In Evelyn Waugh’s Brideshead Revisited Lord Marchmain, on the evidence given, had led the life of an apostate and a sinner.   Received into the Church on the occasion of his marriage, baptized, shriven, confirmed, it would seem that Lord Marchmain remained nominally a practicing member of the Church  for a decade or so.  Then came the war; he left his family never to return.   He finds his freedom and spends what must in narrative time be a decade in Venice with his mistress Cara.  Then another war, when Lord Marchmain returned home to Brideshead, his great country house, to die.  His eldest son, unintentionally officious but faithful, worries that his father will die unrepentant and urges him to see the parish priest, hoping that he will repent, come back to the Church, and die in a state of grace and hope.  Lord Marchmain refuses until the last minute, but then responds to the priest’s gentle importunings, coming late into the Lord’s vineyard by making with what seems to be his last breath, the sign of the cross, to the relief and gratitude of his family. And we are left to believe that the old marquis, the last, will see the face of God as surely as his daughter Celia, a soul filled with charity and good works.

Lord Marchmain is exemplary of a category of late repenants described poetically by Dante in the first three cantos of the Purgatorio.   Manfred was the natural son of the Emperor Frederick II, who legitimized him and made him regent during the reign of his half brother Conrad IV.  Manfred became king of Sicily, and a Ghibelline, or member of the anti-papal party, and was excommunicated twice.  If Dante’s picture  is right, Manfred was no better than Lord Marchmain.   Dying unconfessed,  Manfred says:

In his final breath, as he lay dying of mortal wounds, Manfred triumphs; “I gave my soul to him who grants forgiveness willingly.” This slightest hint of green, like Lord Marchmain’s sign of the cross, is enough to bring Manfred  finally into the blessed vision of the Trinity.    True, in Dante’s account  Manfred will be required to wait in purgatory the space of his lifetime before entering the Presence, but soon he, and Lord Marchmain, will be home.

Neither Dante nor Evelyn Waugh is doing theology; both  are creating images of the late repentant framed against the background of the boundless mercy that stretches out its arms to anyone who comes in search of it.  Dante is expressing the truth that God is not bound by the sacraments.  He will have mercy upon who He will have mercy.  But what God is bound by is the necessity for repentance for our horrible sins.  Consistent with His blessed character and our freedom He will not invite into His kingdom anyone who would not be at home there. What must be is the unstinting giving up of ourselves to the mercy that stretches out its arms toward us.

Surely the burden of this great parable is to give us hope for ourselves and for the world we know, which like the world in every age, is populated with those who stand idle in the marketplace, waiting for the invitation to enter the vineyard.   It is a common experience that the gift of faith received at baptism may not be realized at once or soon.  The Book of Acts records the occasion when Samaritan Christians, newly baptized in the name of Jesus, had not received the Holy Spirit, whose absence was supplied by the apostolic laying on of hands (16:8).  The very existence of the sacrament of confirmation suggests that those who are baptized still need the strengthening gift of the Holy Spirit.  And we are all familiar with those, perhaps ourselves, who seem to have no lively interest in the faith suddenly becoming faithful, taking up their cross, ceasing to watch idly on, and entering the vineyard.    God calls His own at different times and in different ways, whether at dawn, noon, or in the evening of life.   Manfred and Lord Marchmain came to grace and belief when the day was far spent and night fast coming on them, but return they did, and when they came the boundless mercy stretched out His arms to them.