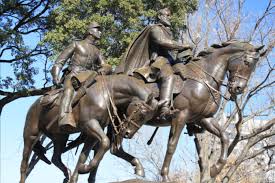 The Latin monere means to remember, and the suffix ment recognizes the result of an action, as in armament and accomplishment. The word monument is especially associated with the remembrance of the deceased; it is a distinctively human thing, buried in the ancient memory of the race, that our departed are not abandoned to the animals but buried with some external sign, a standing stone, a pile of rocks, or covered with stone slabs.  We know so little about the past. In 2012 a cemetery 4000 years old in which two important personages were discovered buried with their chariots in Georgia. And by then we are coming upon the pharaonic obsession with being buried in unforgettable splendor with all the equipment necessary for the good life included. To be a great person was to have a great tomb, as in the case of the tomb of Hadrian, better known as Castel San Angelo and the tomb of Augustus, almost as large but in ruins, and the doughty little tomb of Theodoric the Great on a traffic island in Ravenna.  The Middle Ages displayed a special interest in erecting be-jeweled monuments over the relics of the saints, as at Becket’s tomb—hastily destroyed by Henry (wrong message)―and at Compostela. For splendor it is hard to beat the tombs of the Medici in Florence, and then there was apparently the scheme of Julius II, happily frustrated, to make the new St. Peter’s a family tomb. St. Peter’s was already a vast memorial to the Apostle Peter, whose remains lay beneath the high altar.

In a general way the Renaissance was the last great age of tomb building.  One thinks of the canopied tomb of the Viscounts Carey that occupied one chapel in St. Mary’s, Burford, Oxfordshire.  But from that point there was a steady diminution in great tomb-building, culminating in the twenty-first century, when you ancestors can be reduced to ashes in a number eight juice can.  But in the intervening centuries burial in the church-yard or the family cemetery on the farm or plantation was the Christian way. And of course among Catholics the practice of praying for the departed, who might be in the last stages of the great journey, persisted.

Great events were also memorialized.   One can see the entire liturgical history of Israel  as a corporate act of anamnesis, from Passover, which recollects the deliverance from Egypt under the protection of the Lamb to the Feast of Booths.  Christianity is founded on the act of recollection commanded by Christ on the night in which he was betrayed, which remembrance, with its varied meanings, is now probably the most commonly shared activity of the human race.  The Greeks, too, had their memories; thus the monument to those who fell at Thermopylae, and the various monuments to the poetic and athletic achievements they so admired, as in the famous Choragic Monument of Lysiscrates in Athens.

The wars and revolutions of the great consolidated states of the eighteenth and nineteenth centuries provided ample opportunity for monument building.  Paris is significantly a monument to Napoleon Buonaparte, the gifted soldier and revolutionary bureaucrat who made France great again to the detriment of the rest of Europe.  The Pantheon is his tomb, and the Arc de Triomphe de l’Étoile, the Arch of Triumph of the Star, commissioned in the wake of Napoleon’s victory over Russia and Austria at Austerlitz in 1805, recounts his conquests.  The Trafalgar column in London was commissioned at about the same time, commemorating the victory of Nelson over the Spanish and French in 1805. Washington is full of monuments, most notably the monuments to Jefferson, Lincoln, and Washington,  Only the Washington Monument is (belatedly, 1831) a burial place.

The eighteenth and nineteenth centuries had their internecine, civil wars.  The conflict between Jacobins (defenders of the hereditary rights of the Stuarts) and the Hanoverians, the succession of William and Mary, lasted for about fifty years (1790-1845), the English won, and as far as I know―which is not very far—there are no English monuments to the valor of the supporters of the Stuarts in the uprisings of 1715 and 1745.  The Scots were annexed, their clans outlawed. Similarly, the French revolutionaries killed perhaps 200,000 French citizens of the Vendée between 1793 and 1795. One might say that the American Revolution was a kind of civil war. It was not very easily compromised, but after the collapse of Napoleon British and Americans found much in common.

The War Between the States or the Civil War was not easily settled and is perhaps not settled yet.   Battles between brothers often have a special bitterness. The South, especially the lower south, had been successfully invaded and punished, and was to remain occupied until 1875.   Then the South enjoyed its first modest post-war boom. If you will study the pictures of your ancestors, even of the farming yeomanry, you will see that by 1895 prosperity had set in.  There was a movement toward unity all around. But memory ran deep, and in southern imagination the war had been fought over a political theory—was the united States a unitary sovereignty such as France or was it a compact of states.  There was a respectable body of opinion that it was a compact, solemn, but a compact still. In 1814-15 the New England Federalists seemed willing to threaten secession over the three-fifths rule. South Carolina had always been a troublesome member of the Federal Union, requiring Andrew Jackson in 1836 to threaten, Trump-like, to go to South Carolina to hang the governor himself if the state persisted in nullification.   Why was Lincoln a convinced exponent of the unified state theory? Perhaps because civic piety required it. Perhaps because this was the platform of the National Republicans. Perhaps because he was from that part of the country that saw itself as the creation of the Federal government. In any event, Lincoln would have the union with or without slavery, but he would have the union. South Carolina thought otherwise and considered Lincoln a danger to its existence as a place utterly dependent upon African labor,  which was no more than the Federal constitution had guaranteed just seventy years before. South Carolina seceded on December 6, 1860. Fort Sumpter surrendered on April 12th.  This was Lincoln’s last causus belli, the other forts having surrendered.  On the 15th, he called from each state to provide 75,000 troops to suppress South Carolina.  The reply of the Governor of Tennessee, on his way out of the union, was “Not one soldier for coercion.”   But the war was on. The southern population flocked to the defense of their country and with that the back-handed defense of the institution that so exacerbated Abolitionist opinion, an institution in whose defense it had in general displayed no fervent interest. The issue was that Lincoln was raising an army against them. Half a million lives later the union was preserved.

A nation may be defeated but not vanquished.  Bitterness seems to have died quickly, but there survived, among a people who believed in the hand of providence, both acceptance and a  sense of justice defeated, or at least a sense that we survived and were glad we did, our soldiers fought valorously and had a good constitutional cause.  As Walker Percy put it, “I’m glad we lost, but I’m glad we fought.” Thus the period 1890-1910 saw the beginning of the creation of a southern national memory, at the zenith of which was Margaret Mitchell’s 1939 Gone with the Wind, and which persisted into the states rights movement of the fifties.   Along the way there had been Thomas Nelson Page, and the glamorizing of southern history.  Consider the Dallas Confederate memorial, erected in 1896, the year that the United Daughters of the Confederacy was founded in Nashville. The inscription on the south-facing side below the medallion reads, “The brazen lips of Southern cannon thundered an unanswered anthem to the God of Battle.” The northern face is decorated with an anchor, and reads, “It was given the genius and valor of Confederate seamen to revolutionize naval warfare over the earth.” Below the writing, another inscription says, “This stone shall crumble into dust ere the deathless devotion of Southern women be forgotten.” The west side inscription is below an engraving of crossed swords and reads, “The Confederate saber kissed his blade homeward riding on into the mouth of hell.” The east side of the Dallas monument is decorated with crossed rifles, and reads, “Confederate infantry drove bayonets through columns that never before reeled to the shock of battle.”  Thank you, southern ladies.

Retrospectively, what Lincoln had signed up for, what he would not forego, was the North American version of the nineteenth-century consolidation movement, thank you Hegel.  This same movement inspired the creation of the compact French empire, provinces all new-named, of the same size, and the revolutionary invasion of the rest of Europe, the expansion of the Russian empire to the northwest frontier of India, the consolidation of the non-Austrian German-speaking states into the Prussian Empire, with the consequent sacking of Silesia, Schleswig-Holstein, and the invasion of France in 1870, leading of course to the Third Reich.  Along the way a consolidated Italy featured Mussolini and the invasion of North Africa and Greece.

It also created the American Empire.    Consolidation was at the least an ambiguous good.  David Bentley Hart was speaking of secularization of the churches, when he wrote “It is hard not to conclude that the chief inner dynamism of secularization has always been the modern state’s great struggle to free itself from those institutional, moral and sacramental allegiances that still held it, even partially, in check, so that it could get on with those mighty tasks—nationalist wars, colonial empires, universal conscription, mass extermination of civilians, and so on. . . .” (Atheist Delusions, 223). Consolidation was an essential step along the way.

But to return to monuments.  The secular Puritans are right to attack them, although they do not know why.  The monuments of the 1890s were not in celebration of the suppression of anybody, although there is always in southern society, and perhaps elsewhere as well,  a shameful anti-black hostility shared by a narrow range of the lowest rungs of society, which will be here forever—African-Americans rightly call them Crackers.  The monuments were a celebration of the fact that while we had not won we were not defeated and we were and are proud of the men who fought and those who led them.  Obliquely they stand as a reproach to the Lincoln government who, perhaps understandably, would not wait.