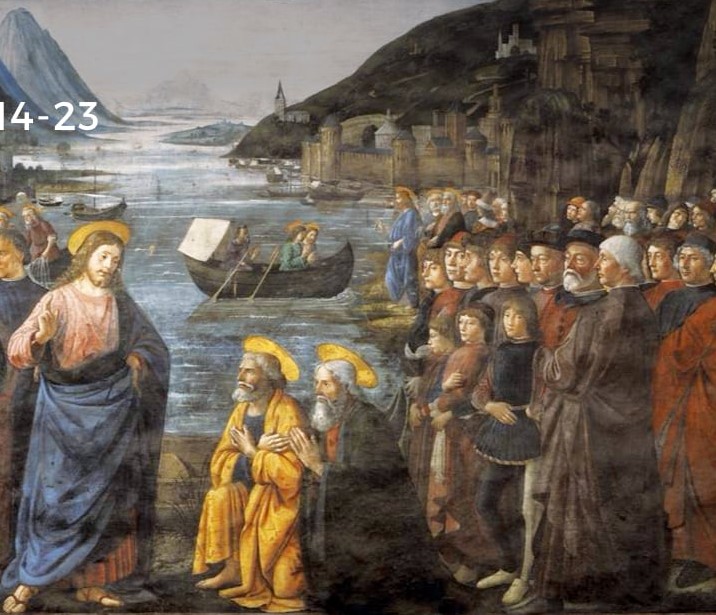 “Hear me, all of you and understand.
Nothing that enters one from outside can defile that person;
but the things that come out from within are what defile.

“From within people, from their hearts,
come evil thoughts, unchastity theft, murder,
adultery, greed, malice, deceit,
licentiousness, envy, blasphemy, arrogance, folly.
All these evils come from within and they defile.”

With these words Jesus challenged the Pharisees claim that holiness consisted in strict obedience to the propositions of the Law, 613 in all according to later tradition, that included not only the Great Commandments:  You shall love the Lord your God and your neighbor as yourself, but also minute rules about  the washing of hands and the company one kept.    Our Lord’s point in this exchange was simply that it was damaging to the soul to insist on the small things that affected the outside, our behavior in the world, while ignoring what was going on within.    And what was going on within Jesus described graphically, from evil  thoughts and unchastity to blasphemy and folly, in short the catalog of human failure when the human heart is unhealed.   This will create a situation in which law will  be used to blot out charity and duty, as, for example, when one refuses to support aged parents on the grounds that the money is already corban or promised to the Temple treasury, a practice not uncommon among the Pharisees, who used the law to avoid true righteousness.

When the human heart, which is born in slavery that is original  sin, is unhealed, unrighteousness will reign; human cleverness will think of a way to seem righteous while in fact assiduously achieving the projects of a fallen will.   Throughout the long years catalogued in Hebrew Scripture, Israel had been moving ever closer to the moral fulfillment anticipated in this text, the day when God would give not only commandments but a new heart.    The Pharisaic movement was the project of the best and the brightest, and it was woefully incomplete at its heart.   The prophets had always known that God would not accept the sacrifices of any save those of humble and broken heart, who, following the great example of Job, would finally cease arguing their own righteousness and accept the truth that God was the potter, they the clay.  It was not news in Israel that God would put down the mighty and lift up the lowly and meek.  But the entire Pharisaic tradition was devoted to what Newman called making a fair outside, which made Jesus say that the Pharisees were like whitewashed tombs, clean and bright on the outside, while within there were dead men’s bones (Matthew 23:27).

There is something here about the order of men’s loves and the order that is in their lives.   If one wishes to have a clean outside, this project, the project of having a clean outside cannot be pursued directly with authenticity.  But if one puts first things first; namely love of God and neighbor, the world of smaller things may very well order itself aright.     In the long run one cannot have good manners without good morals. While always recognizing that the claims of God are not to be met on utilitarian grounds; we cannot with success teach Christianity to have a safe society, there is a reason why convents usually have a lovely and evident order, and it is not because religious women are better at house cleaning.

Given that Jesus was right and just in his condemnation of Pharisaic morality, given that His catalogue of the contents of the un-graced human heart is correct, the only cure for humanity is not the cure proposed by the philosophers, which, although it had a certain truth lacked power to make holy, pleasing to God, and pure in conscience.   The only cure that would suffice would be the gift of a new heart.  This was the promise of the great prophets; that God would establish His reign by giving a new covenant, “not like the covenant he made with their fathers when he brought them out of Egypt,” but one under which he promises those He calls into His kingdom new hearts.  It is Jeremah who promises in God’s name:  I will put my law within them and I will write it on their hearts (31:31-34).    Christ’s death on the cross was the blood of the new covenant that purchased the forgiveness of our sins (Matthew 26:27).  His resurrection foretells the life of Glory.  His promise was that He would send His Spirit, so that He would be in us and we in Him (John 14:11, 20).   The analysis Jesus gave the Pharisees, His awareness that the human heart left to itself is desperately wicked, is background for the miracle effected at baptism and in the sacraments through which those whom He calls  are made holy so that our will may be His will; as Dante wrote, in His will is our peace, and our joy and above all the possibility of being pleasing to our Creator, who is also our Father.

Modernity, the harsh period through which we live, makes two mistakes.    It often assumes that as we are found in the world we are good, a theory urged by Jean-Jacques Rousseau at the end of the eighteenth century and since taken into the cloying moral environmentalism which assumes that were it not for poverty and poor education every person would be good.   This popular theory is self-evidently false and to its falsity every newspaper witnesses daily as it catalogs our follies.  CEO runs off with secretary; banker absconds with funds; woman beaten, child abandoned, etc., etc.   In fact we are not good as we come into the world; we are liable to the catalog of sins with which Jesus confronted the Pharisees, but we can be made good by the grace of God the Holy Spirit, so that Jesus’ catalog  of what lives in the human heart is not the final report.

And then modernity, while proclaiming the essential sinlessness of the human race, simultaneously denies the possibility of holiness because it denies the very possibility of the restraint that lifts the human person into the company of the saints.  The line from the country music song, “If it feels so good it can’t be wrong,”  does not, as a moral theory, do much to elevate the human soul above the terrain we as animals share with our cats and dogs, but it is the thesis of a good deal of the moral chaos Jesus described in the superscript above.