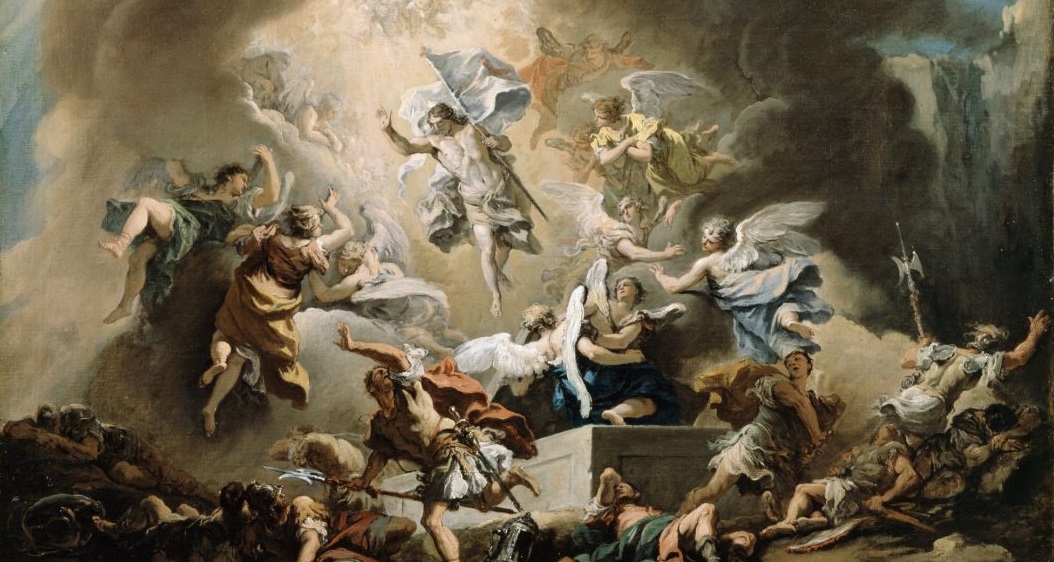 Jesus said to his disciples:
“There will be signs in the sun, the moon, and the stars,
and on earth nations will be in dismay,
perplexed by the roaring of the sea and the waves.
People will die of fright
in anticipation of what is coming upon the world,
for the powers of the heavens will be shaken.
And then they will see the Son of Man
coming in a cloud with power and great glory.
But when these signs begin to happen,
stand erect and raise your heads
because your redemption is at hand.

According to the progressive account the world we know will get better and better, climate controlled by man, the goods of the earth equitably distributed.  Iphones and electric vehicles will have been perfected,  there will be a world government.  Heaven will have arrived on earth; Christ’s prayer that the Kingdom would come will have been realized.   But human nature will be unchanged.  The selfishness, greed, and lust that characterizes human behavior, always frustrating our desire to do good and be good, although perhaps contained with pharmaceuticals will still be rampant.

But what if the history of the world is not a tale of technical progress and political pacification; what if this giant whirling cosmos is no larger than  a grain of sand in the hand of God omnipotent who made it and who will in due time call it home?     What if the quality of life that matters is the quality of our relation to Him and to our neighbor, not the sum of our achievements and possessions?     What if it is not the outside of man and of history that matters but the inside, the will and the heart?  What if the real you is not the self who moves easily through the world but that self who is with you when you lay your head on the pillow in the quiet of night?

That is always the question: are we things of stuff, bound in a cycle of endless birth that ends in death, or are we sons of Our Father in heaven,  making our way through time, enjoying a created order that is a sacrament of something better that is coming?     And when we look at the world through which we move, can we believe that the promise of the rose and the sunrise, the promise of every heart’s hope,  is a political settlement or a government program or the advance of science?  For in this world the highest thing we know is persons.  And if it were not revealed by God it might still be urged on the basis of insight that the end of life and history must be a person, for there is nothing in creation greater than a person.    And the Church teaches as truth revealed in Scripture and Tradition that the person who is coming, in whom all things are redeemed, is not a political person or a poet but Jesus, a divine human person who was once among us but who now reigns in heaven,

His second coming—for He has been among us once—is promised in the words of the New Testament, better New Covenant.  In John:

Paul in Thessalonians: “The Lord himself will descend from heaven, with a cry of command, with the archangel’s call, and with the sound of the trumpet of God.  And the dead in Christ will rise first” (4:16).

And from John’s prophecy:  “I saw a new heaven and a new earth; for the first heaven and the first earth had passed away . . . And I heard a great voice from the throne saying, ‘Behold the dwelling of God is with men’” (21:1, 3).

Of course the thought that this person who is the meaning of life and history will appear in clouds of glory from the sky is considered by a materialist, secularist culture to be an impossible fancy, having no claim to reality.  This will be said because they believe there is nothing in the world but its outside in all its obviousness.   They forget that this cosmos that seems so solid is a thought in the mind of God and a creature of His will, so that at any moment He may choose to perfect it by bringing this fallen world order to an end at Christ’s return, renewing it and remaking it under the power of His eternal purpose into the new creation he willed in the beginning.   “For as the lightning comes from the east and shines as far as the west, so will be the coming of the  Son of Man” (Matthew 24:27).    It will always be difficult for secularists to believe that Jesus will appear in the clouds with glory because they forget that the sky is His, it was made through Him.

The world has been taught by secularist  modernity that “all things continue as they were from the beginning of creation” (II Peter 3:4) that progress will continue, there will be peace and finally world government   The text superscript tells us that Christ’s return will be accompanied by disturbances in the sky and sea, by great fear among those who do not believe.  This truth, that after a time of crisis, nature released from its sin-afflicted pattern to be remade anew, Christ will return.  This is a time for Christians to stand tall, for Christ’s return  is our redemption.  Meanwhile, the fact of Jesus’ return may give us occasion to reflect upon the false finality proposed by the secular lie that this world is all there is, that what you see is what you get, that there is no meaning beyond the progress proposed by the secularist project.  “Come, Lord Jesus”  is the prayer of the Church (Revelation 22:20).