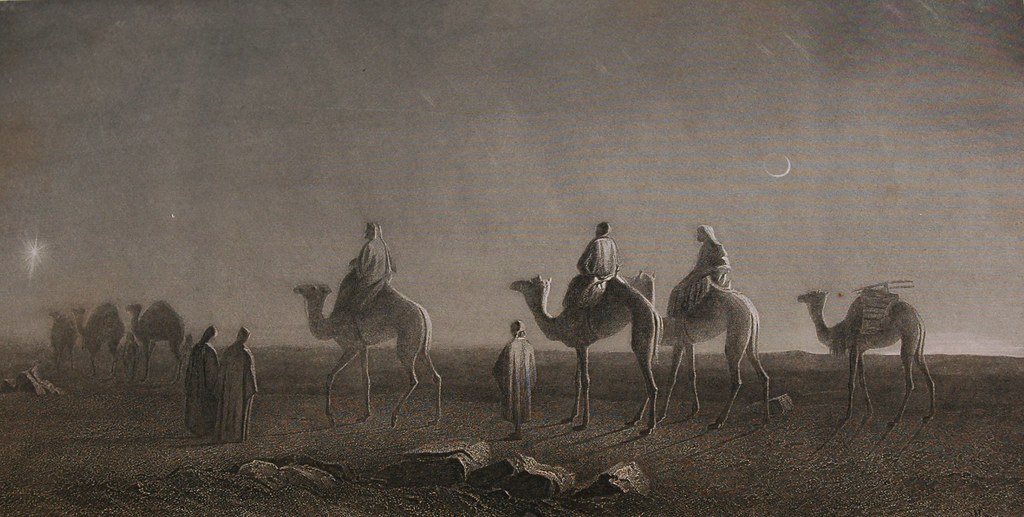 The star which they saw in the East went before them
til it came and stood over where the young child was.
When they saw the star they rejoiced with exceeding great joy.

The sixth of January, the twelfth day of Christmas, is the Feast of the Epiphany, when the recognition of Jesus as the Great King by the gentiles in the persons of the  wise men is celebrated. The wise men, magi as the Greek calls them, came seeking a king.  And this the Angel Gabriel had promised to Mary:  “The Lord God will give Him the throne of His father David, and He shall reign over the house of Jacob, and of His kingdom there will be no end”(Luke 1:33–34). The wise men had not come to discuss theology or to satisfy curiosity but to worship.   And their worship and their gifts represented the humble allegiance to truth of those we now call men of science, for the magi were the natural philosophers of the first century, men of the East, perhaps Persians, astronomers and perhaps astrologers, interested in understanding nature’s lessons, in this case, willing to follow a star, known to them as “His star,” the King’s star.

It has ever been the intellectual habit of Christians to learn from nature.  We do not know much about Saint Paul’s education, beyond the fact that he studied with the great scholar Gamaliel in Jerusalem.   Then there is the hint in Romans 1, where he acknowledges his debt to the Greeks and to the Barbarians.   His debt to the Greeks is evident in his ability to quote the poets Epimenides and Aratus before the council of the Areopagus (Acts 17:28–29), as well as in his grasp of ideas such as the participation of Christians in Christ that might be shared with the Platonists and Stoics of his day.   Paul’s claim too, like that implicit in the magi’s journey, was that nature taught the most important thing, the existence and power of God; that nature, like the wise men’s star, would, if followed faithfully, lead us to our King.

From Paul, through the great medievals, Aquinas and Bonaventure, to the nineteenth century, it has been the claim of Christian scholarship, and indeed of all Christian thought, that knowledge of nature would lead to God.  Perhaps this reached a popular apotheosis with the Romantic Poets of the nineteenth century.   And then, as though a door has been slammed in the face of the inquirer, it became philosophically unfashionable to see God’s mighty hand or the beauty of Christ’s face in nature.   Now it would not be easy to find a professional philosopher who  taught that St. Thomas’s Five Ways offered intellectually compelling reasons for belief in God.

This is in some measure due to the circumstance that it is now the enemies of reason who define the reach of reason.  We owe to the eighteenth-century British philosopher David Hume the observation that treatises on divinity contain no knowable truth while impressions derived from the senses, call them matters of fact, may be considered true,  and analytical statements, statements in which the predicate is contained in the subject (unicorns are one-horned animals), may be considered if not true at least logically valid.  It may be admitted that speaking of God’s existence under these canons of reason is impossible.  There can be no empirical proof, for while God may make himself known to Moses, and while Christ might appear to the apostles, these events, like Pentecost itself, are not empirically knowable since they are the experiences that while they may be compelling are the consequence of faith and as such are not universally available as evidence of God’s existence.   And as for logical proof of God’s existence, the first premise in a deductive argument must always be question-begging, assuming what it seeks to prove.

What this canon of the knowable omits is the kind of knowledge that may be called historical, that kind of argument in which thought, presiding over a field of facts and experiences, draws a conclusion.   Several of the classical arguments have this kind of form, most notably the argument from design, the observation, based on our experience of a world of great complexity in which things have purposes and patterns, that where there is order and design there is a designer.  We see that a nation is experiencing an unprecedented military buildup, which is coupled with threats and bellicose speech.  We may conclude that war is likely, or very likely.   War may or may not come, but in a pale analogy to Pascal’s wager, better safe than sorry, we are probably best advised to be prepared for war.   Probability is, as Newman counseled, the guide of life. We  experience, often through long years, an ordered world in which some things go wrong, but more go right.  By calling the wrong things wrong, we acknowledge that they do not belong to the order of reality.   From this preponderance of evidence we may conclude or be led to believe that the world moves under the providence of a loving and beneficent God.  This is not a formal philosophical argument any more than was Paul’s observation in the first chapter of Romans that from the creation of the world the unseen things of God, his divinity and power, are clearly perceived.

The Psalmist knew this:
The heavens declare the glory of God
And the firmament showeth his handiwork

For Dante, “Nature is the art of God,” an idea persisting even amid the pantheistic theology of the Enlightenment, in Alexander Pope’s words:
All are but parts of one stupendous whole,
Whose body Nature is, and God the soul.

William Paley’s Evidences of Christianity (1794), which remained an important collegiate text throughout the nineteenth century was the scholarly formulation of the common observation that the intricate regularity of nature attests the existence of its creator.  This idea is a perennial of human thought and imagination. That the glory of God my be perceived in the things that are made persisted into the foothills of modernity in sentimental ballads of the 1950s:

I believe above the storm the smallest prayer will still be heard
I believe that someone in the great somewhere hears every word
Every time I hear a newborn baby cry or touch a leaf or see the sky
Then I know why I believe.

In the long run the only argument against the argument from design, the claim that there is no Great Designer, is naturalism, the assertion that nature is a self-explanatory  process.  And the only counter argument is wonder. Mankind, not educated to skepticism by the infernal knowingness of the fallen world, has always found nature, despite that side of things that is disordered,  wonderful and has moved in imagination to the conclusion that God is the Creator.  When told that the old proofs for the existence of God are invalid, pay no attention.   They are for the most part not formal deductions but common inferences.  Such knowledge is not of itself salvific, but it does provide the common insight that faith presupposes and without which faith cannot possess the human heart.  As Hebrews tells us, “Whoever would come to God must believe that he exists” (11:6).

Just how the wise men knew  that the star they followed was his star, the star of the great king,  is hidden in their science, but on they came o’er field and fountain, moor and mountain following the star, willing always to be led by nature to the King whom they had travelled far to worship.