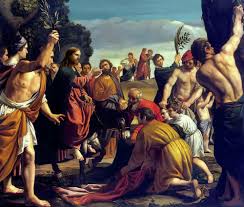 Those who keep His commandments remain in Him, and He in them,
And the way we know that He remains in us
Is from the Spirit He gave us

Then Barnabas took charge of him
and brought him to the apostles,
and he reported to them that he had seen the Lord,
and that He had spoken to him

Since the late eighteenth century the first principle of the increasingly common academic  philososphy has been the conviction that nothing deserved the name ‘knowlwdge’ that could not be seen or touched.   This idea, which has not stayed within university walls, has  recurred since Lucretius or before.   In current form it is attributed to David Hume (1711–1776), who used it to say that books of theology and metaphysics pretended to a knowledge that they did not in fact command, since the realities they bespoke, although thought and experienced from Plato to Descartes, could not be touched or seen. This passage from Hume’s Enquiry Concerning Human Understanding has been quoted tirelessly to discredit revealed wisdom and any philosophy that claimed knowledge of things transcendent and to lay the foundations for the common empiricism that discredits every claim to knowledge that does not respect the Humean dictum, which is most of thought occurring before 1770.

To say that the Humean proposition has no explanation for any of these things, the effects of which are obvious but the springs of which are hidden, is not to claim that there are causes Hume overlooked—in fact he was puzzled by the very idea of causation—but to notice that none of the actions or attitudes cited above can in their causes be touched, weighed or measured.    Hume’s implied theory cannot even explain Hume, a Scot, who had a theory, or theories, that reached deep into Hume’s personality.   Unkind critics have suggested that his philosophy was motivated by his distaste for Calvinsim, but distaste for Calvinism cannot be weighed or measured.    The fact is that from the love that moves the sun and other stars to the heroism of the man who jumped off the 14th Street bridge into the rocky Potomac when Air Florida went down in 1990, the world is a texture of  experiences that cannot ignore but will always transcend Humes’ common sense observation, which could have been made by Aristotle,  that we should pay attention to what our senses tell us as they engage the world.

Christianity shares with Hume an essential interest in the empirical because it rests on experience.  The Apostle Thomas believed only after he had put his hand in Jesus’ side (John 20:27).  The disciples believed Jesus after He spoke to them on the road to Emmaus (Luke 13:31).  The Gospel of John rests its claim to authenticity on the fact that the Beloved Disciple had seen Jesus make the great sacrifice (John 19:35).  The disciples brought Paul to the apostles not because he had subscribed a statement of faith but because he had seen Jesus, who had spoken to him.    John says that  we know Christ remains with us because He has given us His Spirit who lives in us.    These are experiences, things felt and touched, that, like the inspiration for the Mozart Requiem, go beyond the obvious, but they are unlike these purely human, if mysterious, experiences, in that they engage the human soul with the divine or supernatural.   They are however experiences, and they can be discredited only on the thesis that the supernatural cannot and does not exist, which is information Dawkins and Hitchens cannot have and which they can assert only by relying upon the Humean canon, which begs the question by asserting that there is nothing beyond what can be touched or seen,

John says of Jesus resurrected in glory we have seen Him with our eye and touched Him with our hands (I John 1:1).    John’s testimony can be discredited only by assuming that Hume had offered a comprehensive description of reality, when in fact it not only denied the transcendental without more than a dogmatic warrant but does not in fact explain Hume. This is not to say that belief in the created mystery represented by Tchaikovsky’s writing of his Second Symphony or Raphael’s painting of the Disputation of the Holy Sacrament is to be confused with those mysteries enabled by grace and grasped by supernatural faith, but is to say that human life is open to more than the obvious and that, given the evident truth that the human soul is thus open, God can bless the experience of knowing Him with a certainty rooted in the experience of His presence that lies beyond what Hume was able to describe.   We know that He is with us and indeed in us because He has given us Himself, His Holy Spirit.

The refusal of the Church to accede to what the popular culture of modernity considers its obvious intellectual defeat by the Humeans, the Utilitarians, the Pragmatists of every kind, is surely a cause of frustration to its enemies.   The religion of Christ should have died in its cradle as an antisocial myth foreign to civilized Romans, and, that failing, it should have suffocated when it became deeply implicated in wealth and politics, and then again it should have expired when it was fractured in the sixteenth century.   The Enlightenment should have killed it.  Darwin, whose theory proposes a yet-to-be solved challenge, instead of damaging the faith should have finished it off.

But there it is, wounded in its heart and in its homeland, but still indefeasible, inspiring fidelity and martyrdom across the world, and still as when John wrote the possession of those who know that He remains in us by the Spirit He has given, an experience. a knowledge, that the Humean canon can neither derogate nor illuminate.  Holy Schadenfreud, pleasure in the discomfort of others, would be an evil oxymoron, and taunting the Prince of this world would be the most unwise of policies; but his lot must ultimately be frustration.  He will remain lord of the world until Christ returns, but only until then.

Of that event Jesus asked (Luke 18:8), “When I return, will I find any faith on earth?”   We know that the answer is yes, although how much in how many and where is not ours to knows.