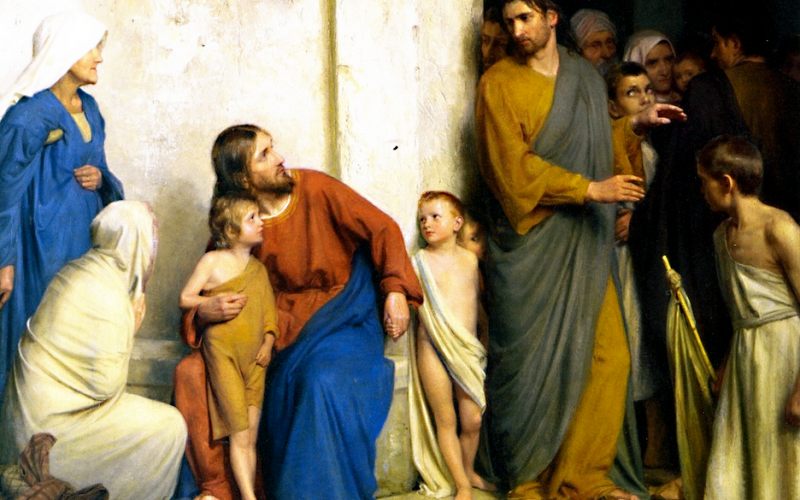 Beloved:
See what love the Father has bestowed on us
that we may be called children of God.
Yet so we are.

For much of the last century fatherhood has been an  endangered vocation. In the popular culture of the twenty-first century Patriarchy, when it is not the subject of ridicule, is a synonym for repression, an ancient pathology belonging to a vanished world in which fathers attempted arbitrarily to exercise authority and commanded obedience.  In a complementary way to be child-like, open and trusting, an attitude that our Savior considered necessary to faith, is now  counted naiveté.   Yet He once called a child, put him in their midst, and said, “Truly I say to you, unless you turn and become like children, you will never enter the kingdom of heaven.  Whoever humbles himself like this child, he is the greatest in the kingdom of heaven” (Matthew 18:1-5). And the wide world forgets that Jesus taught His disciples to call God His Father and theirs.  Christ the Son of God taught us to  pray beginning with the words “Our Father,” that He calls God His father thirty-four times in the discourses of chapters 14–17 of the Gospel of John, and His last words were, “My Father, into your hands I commit my spirit” (Luke 23:46).

But leaving aside the folly of the present—and every age has its follies—we can remember that fatherhood is the cornerstone of reality in the world Christ revealed:  the divine paternity of our Creator, the paternity over the Church of him called in Italian Papa, our pope, in the old world the paternal government of the anointed king, and everywhere the divinely appointed fatherhood of the head of every human family.

Among things human, the finest aspiration of every man is to be a good father, to beget children of the woman beloved is a natural duty, but fatherhood  itself in its fulfilment of a vocation that must be chosen and in Christendom fatherhood is a supernatural vocation.  In the natural and divinely appointed order every father is the head of  household, for which, the Christian way teaches, he must be willing to give his life, not always or even often  in a dramatic one-time fashion, but in the wearying, unending way of life lived, thus imitating Christ, who gives his life for the whole world and who still  intercedes for us.   Fathers of sons and daughters to a great degree chose that role, and when they choose to fulfill it they do so in imitation of our Father in  heaven, who, having called our humankind into existence first gives His life for His bride the Church whom He loves and then nurtures and disciplines every one of His children.

Just so every father on earth is to his daughters and sons the model of our Father in heaven who governs with power and authority transfused with a tenderness that loves and gives.    Christ assumes the just generosity that belongs to fatherhood:  “Which of you, if a son asks for bread will give him a stone? If you give good gifts to your children, how much more will your father in heaven give good gifts to those who ask him” (Matthew 7:9).  The Epistle to the Hebrews construes the obedience of children to their fathers as analogous to the duty of every Christian to God the Father:  “We have earthly fathers to discipline us and we respected them. Shall we not much more be subject to the Father of Spirits and live?” (Hebrews 12:7).

The world Saint Paul assumes is one in which the bond that binds the family together is love made present in obedience. We know that these are inseparable:  Jesus said, “If you love me, you will keep my commandments” (John 14:15). Saint Paul says directly:  “Children obey your parents for this is right.  Honor your father and mother (this is the first commandment with a promise) that you may live long on the earth” (Ephesians 6:1–2).  And Paul then makes it clear that paternal authority combines patient teaching with discipline:  “Do not provoke your children to anger, but bring them  up in the discipline and instruction of the Lord.”

When Saint Paul commands children to obey their parents and wives to obey their husbands he is assuming that this obedience within the family is the second step in a hierarchy of obedience that begins with the father who is head of the family.   To be a good father is not simply to exercise one’s own will, for the tree of obedience that bears much good fruit begins higher.   It begins when the Father himself is obedient to the laws divine and natural, to the teaching of the Church and the laws of the political community, themselves being the reflection of natural and divine justice.   To ask one’s children to be obedient in the Lord, to ask one’s wife to be subject to him, every father and husband must first himself be submitted to the law both of the cross and of this world’s authority.   Saint Paul’s command regarding obedience to political authority , necessarily addressed to fathers as head of the family, are now no less embarrassing than his command that Christians obey and revere the emperor.  But the fact that they cannot easily be located in post-modernity does not mean that they can be ignored.

Just as when nature has been defeated by the awful technological transcendence  that ignores the very forms in things, one must still respect those forms, just so when political authority claims only positive sanction, only the ability to command and punish, Christians, and especially the head of the house, must  live as though the law has the authority of God because the law of Christ lives in our hearts and is taught by the Church. When the head of the house, the authority in the family is truly submitted to the law of Christ it may be time to consider the duty of wives to be submitted to their husbands and of children to be obedient.   If the husband and head is truly submitted to God he has before him ever Paul’s admonition that husbands are to love their wives as Christ loved the Church and died for her (Ephesians 5:25), and as well the teaching of Jesus on the night in which He was betrayed:  “The gentiles lord it over one another, but it shall not be so among you,” and he has in  memory  as well the admonition that children are not to be provoked to anger (Ephesians 6:4).  A husband and father thus armed is able to expect from his household the obedience that belongs to love.

Saint Paul incidentally names one other tie between fathers and children.  In explaining to the Corinthians that he seeks nothing but their good, that they owe him nothing,  he writes, “Children ought not lay up for their parents but parents for their children. I will most gladly spend and be spent for your souls.”  Paul is citing a commonplace of family life to illustrate a spiritual obligation, but it is noteworthy that he recognizes the duty of fathers to the secular  future, to lay up something for their children.  But Paul knows that the greatest gift of fathers to sons and of mothers to daughters is a tradition of Christian virtue and honor.