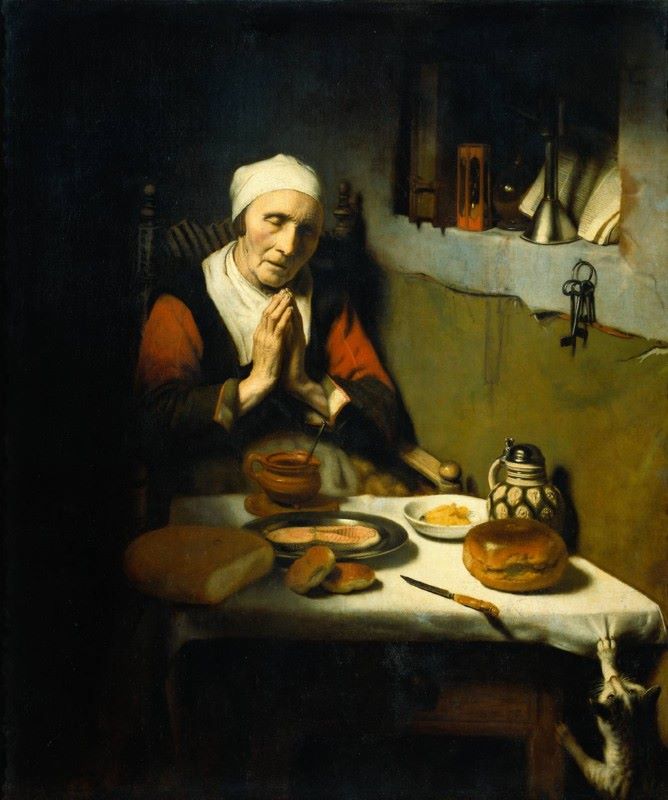 Fasting is about disciplining our appetites, and especially about offering such discipline as a sacrifice to God, an action that at the same time purifies the heart and expresses our sorrow for our sins.   It is not directly about repentance from sin but about foregoing some good or some good pleasure.  It makes us ready to know God more deeply. Moses fasted for forty days in the presence of God when he wrote down the Ten Commandments.   And again Moses lay prostrate in prayer for the Lord’s mercy after his people worshiped the golden calf (Deuteronomy 9:18); he neither ate bread nor drank water.

The vow Paul took in Acts 18:18 was a Nazarite vow; cutting off his hair, was a sign of pious humility.  It probably required that he abstain from wine.  Paul was always in a fight, sometimes doing the thing he really did not want to do, in which battle the best defense was the discipline of his ‘bodily’ desires, inclinations to lust and gluttony.  “Therefore I do not run aimlessly; I do not fight like I am beating the air. No, I discipline my body and make it my slave, so that after I have preached to others, I myself will not be disqualified.”  We are not told that Paul observed or recommended certain fast days, but in Acts 13:2 fasting is associated with worship, presumably the Eucharist.   But not long after Paul’s death in 60 AD the Didache, The Teaching of the Twelve Apostles, recommended:  8.1. “Let not your fasts be with the hypocrites, for they fast on Mondays and Thursdays, but do you fast on Wednesdays and Fridays” (8.1).  There is some thought that the hypocrites were the Pharisaic party, but in any event the advice of the authors has been carried out for 2000 years and the Friday fast is  still required in the Roman Church, while I think it is true that the Orthodox still fast on Wednesdays and Fridays.   Often fasting consists of giving up something that is good in itself, a favorite food, as a small sacrificial recognition of the times we may have given our senses too free rein.

Saint Thomas says fasting has a threefold purpose:  killing lust, setting the mind on heavenly things, and encouraging sorrow for sins.  Fasting survives in the Latin Church in the rule that every Friday is a fast day. The Friday fast is done in commemoration of the crucifixion of Jesus Christ on Good Friday.  As such, all Fridays of the year have been historically kept as a day of strict fasting and abstinence from meat.   Even the most nugatory of fasts is capable of giving great spiritual power.

All this is papist practice, but while Protestants generally had no schedule of appointed fasts, the practice was not foreign to the American religious psyche.  Lincoln could decree in 1863 that the last Thursday in September would be “a day of humiliation, prayer, and fasting for all the people of the nation. And I do earnestly recommend to all the people, and especially to all ministers and teachers of religion of all denominations and to all heads of families, to observe and keep that day according to their several creeds and modes of worship in all humility and with all religious solemnity, to the end that the united prayer of the nation may ascend to the Throne of Grace and bring down plentiful blessings upon our country.” There is still a national day of prayer, but humiliation and fasting is not mentioned.     But Lent, I think, has bled over into Protestant Churches in what seems a beneficent way.

Feasting is endemic to Sacred Scripture, in both present and future aspects..  Prophesying the coming reign of peace Isaiah wrote, “On this mountain the Lord of Hosts will prepare a banquet for all the peoples, a feast of choice meat of finely aged wine. On this mountain He will swallow up the shroud that enfolds all peoples, the sheet that covers all nations.  He will swallow up death forever and the Lord God will wipe away tears from all faces (25:6). And Matthew: “I say to you that many will come from the east and the west and  sit at table with Abraham, Isaac, and Jacob” (8: 11). Eating has been at the heart of Christianity since Jesus took bread and distributed it, and in the beginning the Eucharist was celebrated as part of the Christian love feast, a grand church supper that had to be abandoned because it was abused (Jude 12; I Corinthians 11:20-22).

One may well wonder how the calendar of feasts was constructed.  Start with the fact that Easter, 14 Nisan in the Jewish calendar, was a known date, and Pentecost was fifty days later.   One can imagine that after the resurrection of Jesus research into his origins intensified.  The Church settled on March 25 as the Annunciation, so the birth of Jesus was nine months later, on  December 25th.  Or perhaps December 25th was chosen because it was the winter solstice, and Christmas effectively replaced the Saturnalia, the Roman feast of celebration and gift-giving that commemorated the Solstice.  Certainly the Lupercalia, a vulgar Roman feast that took place in early February was supplanted by the Feast of the Purification of the Blessed Virgin.   All of these represent what is called “sacred times,” whose religious purpose is to keep the faithful mindful throughout the year of the cardinal mysteries and of the heroes of the Christian faith.  The old Church has a calendar full of days on which the canonical saints, those believed to be in the presence of God, are to be remembered and their intercession sought.  To follow them carefully would be an education in itself.   Some are popular, some obscure, such as Saint Just de Bretenieres, whose feast day is September 20th, was beheaded in Korea in 1866.  Under torture he kept repeating, “I came to Korea to save your souls; I will happily die for God.”   Or Saint Casimir of Poland, remembered on March 4th, who was a heroic peace-maker.  Each saint, as being in God’s presence, intercedes for those who ask his aid.

In the old Church the communion of saints means that the barrier between those who died in grace and those living  is very thin or non-existent.    It is probably impossible to explain just why one would believe that, say, Saint Cyril of Alexandria, would add his intercession to my prayers.  Perhaps one could think of Saint Cyril as a senior and conclusively successful member of the family.  I think it would be right to say that in Protestant Christianity that wall is thicker, so that the saints, being perhaps in principle unknown and unknowable and in any event accessible have no purpose other than, perhaps, as examples.  After 1520 the calendar of fasts and feasts pretty much disappeared from northern European Christianity, although Easter and Christmas survived in even the lowest of low Church Anglicanism.  The United States had no Church Year save that found in the Book of Common Prayer.  So Virginia celebrated Christmas.  According to a 1631 account by John Taylor, the festival of Christmas Day began with church attendance. Following that, “some went to cards, some sang Carrols, many merry songs, some to waste the long night would tell Winter-tales …. Then came maids with Wassell, jolly Wassell, cakes, white loafe and cheese, mince pies & other meat. These being gone, the jolly youths and plain dealing Plow swaines being weary of cards fell to dancing to show me some Gambols, some ventured the breaking of their shins to make me sport – some the scalding of their lippes to catch at apples tied at the end of a stick having a lighted candle”

All this Puritans disapproved.  Christmas was made illegal in England in 1662, Massachusetts having done so in 1659.  There was no Biblical warrant for a Christmas celebration, and, as Virginia demonstrated, the behavior it elicited was not always pious.  The Massachusetts holiday was Thanksgiving.   Although a plausible case can be made that Thanksgiving was first celebrated in Virginia, the national narrative attributes the origins of the Thanksgiving feast to the Puritans.   It remains one of two national feast days.  The other being the glorious fourth, the celebration of the signing of the Declaration of Independence on July 4th, 1776.  Christmas cannot be  separated from Christianity and has become mildly controversial.  It was not always so.  From the 1870s, when New York merchants took up Christmas as a sales event, to the 1950s, Christmas was like Thanksgiving a national holiday, with the lighting of the White House Christmas tree a national event.

It is such events that make a nation, or in an analogous and deeper way, the Church.  They represent the rhythm of life.   There ought to be times of national happiness, and Christmas is such, a gift from the Church to the culture, encouraging generosity and gentling our ways here at the winter solstice.