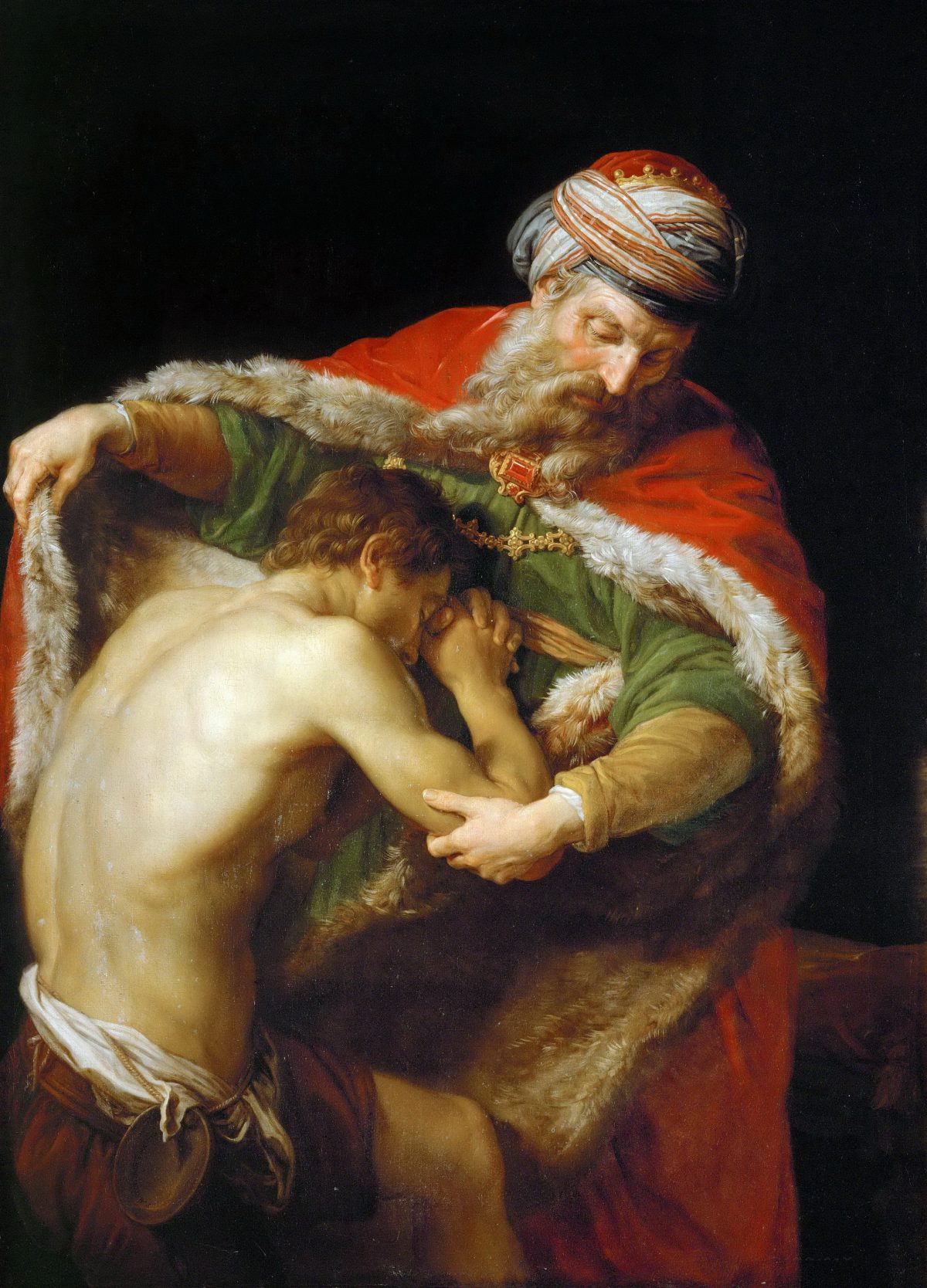 And I saw another angel fly in the midst of heaven, having the everlasting Gospel to preach to them that dwell on the earth, and to every nation and kindred and tongue and people, saying with a loud voice, Fear God and give glory to Him, for the hour of judgment is come, and worship Him that made heaven and earth.
Revelation 14:7

Sacrifice or offering you wished not,
but ears open to obedience you gave me.
Psalm 40:6

The sacrifices mentioned are those offered in the temple, in which animals stood substitute for those offering and through their blood sins were forgiven. It was a divinely ordained system, outlined in Leviticus, that ended abruptly not long after the Lamb of God was sacrificed, fulfilling His prophecy that of Herod’s temple not one stone would be left standing on another (Matthew 24:2). Then at Pentecost the meaning of the Sermon on the Mount was made clear, the more perfect way was made possible; by the power of the Holy Spirit the law was put into Christian hearts, and the prophecies of Jeremiah (31:27–34), Ezekiel (36:26―28) and Joel (2:28―29) that the time was near when God would give a new covenant, not like the old covenant, fulfilled not by the sacrifice of animals but by the obedience unto death, first of the Eternal Son, and then by the obedience of those who would live in and through Him. Obedience of the redeemed heart became the redemptive promise and possibility.

Obedience is not a much-canvassed topic in contemporary society and religion. The god of sentimental love is too tender to rebuke our sins and weaknesses, families believe the psychology of their tender shoots will not bear punishment and eschew obedience as a requirement and fear as a motive. To be like the god of sentimental love who so easily inhabits the imaginations of post-modern humankind is to be sympathetic and non-judgmental, dispositions that often recommend themselves to Christians, but which, mistaken for the fullness of His revelation, obscure the God who thundered from Sinai and who will in the end judge the living and the dead.

In a fallen world, in which sentiment is bent toward self-serving and the broad way, the laws and aspirations commanded by God are not always pleasant. Often the actions and thoughts that make for holiness are only incidentally good for society and in the long run are not supported neatly by any ethical theory. The commandments of God are not examples grounded in some higher order, for there is no higher order than the will and reason of God. And though we may find happiness in obedience to God’s laws, His laws are not commanded only or even principally for our happiness but for God’s glory. Paul points out in Romans that in this life we are situated so that we will inevitably obey, indeed become the slave, either of sin, which leads to death, or of obedience which leads to righteousness (Romans 6:16).

Obedience and fear are almost correlatives, although fear comes in several varieties. There is the fear that besets those who live in conscious rebellion, who are therefore, whether they know it or not―and Satan has no interest in making this clear—in league with Satan and are destined unless they repent to share Satan’s lot. This fear is accompanied by an almost supernatural blindness, so that those thus afflicted cannot see their danger. Repentance, when it comes by the power of the Spirit, can break this fear, transforming it into filial fear, the fear that the prodigal experienced when, realizing that his destiny ought not be sharing husks with swine, said, “I will arise and go to my father’s house, although I am no longer fit to be called your son. I have sinned against heaven and before you.” And with those words the prodigal son became obedient to the will of God and to his father (Luke 15:11–31).

That said, of all the dispositions conducive to the healing of the human soul, obedience is the least mentioned. And this is because, as Paul says in Romans above, obedience means giving one’s own will to another. The Greek word is hupokupos, with hupo being a prefix meaning under affixed to kupos meaning authority. Thus obedience means to be subject to or to be under an authority. There are dozens of ways in which this is ordinarily done in the course of civilized life. We recognize the traffic lights and pay attention to the rules of our bank and to the commands of the Internal Revenue Service. In the practice of a profession there are hundreds of ways in which originality and cleverness, not to say willfulness, may lead to disaster while following the rules of the procedure is likely to produce good results. But in post-modern life on those matters governing our personal actions and thoughts the key is autonomy, rule of the self by the self. If one wants another wife or husband; if one seeks pleasure in soul-destroying ways, who is to say, who is to oppose my will, who is to give me a vision of what my life shall be other than myself? Has not the highest court in the land declared the right to fulfill whatever vision we see as fundamental to liberty. And has not a popular tenor sung for us the theme song of the autonomous life: “I did it my way,” ambiguous words that may reflect the happiness that belongs to accomplishment, but which may also on a certain day conduce to rebellion? In this sea of freedom, who is to command holiness?

And to that the answer is that in matters that touch most tenderly the citadel of the self it is God who determines what is good and right. It is not difficult to show that the abandonment of families by a husband is destructive and detrimental to the good order of the larger culture, that it burdens taxpayers and creates poverty, but finally the reason divorce, even under the solvent pressures of contemporary culture, is wrong is simply that Jesus said, “What God hath joined together let not man put asunder” (Matthew 19:6). There are reasons that the sin of Sodom deserves civil punishment, making as it does a mockery of marriage and diverting the generative purpose toward futility, but the reasons this is wrong is the divine law of Genesis (18:19-27), Romans (1:21-28), and Jude (7). There are reasons why failure to listen to the cries of the poor is bad policy, leading to discontent and perhaps revolution, creating ugly city streets and crime, but the ultimate reason is God’s warning that those who despise the poor may face eternal darkness at the day of judgement, for He loves the poor and downtrodden (Matthew 25:31―46).

This is not to say that the civil code, when it proposes, as Paul so hopefully wrote, to punish evil-doers and reward good deeds, may be ignored (Romans 13:3–5). It is to say that if the voice of the civil code does not echo the voice of the divine law, it will prove feeble and futile in the long run. The anchor of righteousness, the inspiration to holiness, the ground of holy fear is the commanding voice of the Lord. After the Lord spoke to Moses the ten commandments, the people said to him, “Speak to us and we will hear, but let not the Lord speak to us lest we die.” And Moses said, “Do not be afraid, for the Lord has come to prove you, that the fear of Him may be always before your eyes, that you may not sin’”(Exodus 20:19–-20). And the Epistle to the Hebrews explains that “if a man who has violated the law of Moses dies without mercy at the testimony of two or three witnesses, how much worse punishments do you think will be deserved by a man who has spurned the Son of God and profaned the blood of the covenant by which he was sanctified, and outraged the Spirit of Grace?” (Hebrews 10:29).

Fear of God, fear of offending Him who died for us, and obedience to his commands is the orienting motive of the Christian life. In the Bernard of Clairvaux’s Steps of Pride and Humility, the next-to-last step on the path to destruction is freedom to sin, leading to a life in which sin is habitual. This is the living death that is now often offered us by the public culture; when, as in the days of Marcus Aurelius, the spectacles of the arena ever more cruel and bloody, political life ever more callous, addressed to a populace who seem often to have forgotten shame and piety. Fear of God is one of the seven gifts of the Holy Spirit and is the beginning of wisdom (Isaiah 11:2, Proverbs 9:10). It is the fool who has said in his heart, there is no God; he does not see (Psalm 14:1). And true as it is that what is right is anchored in nothing less than the Almighty, that it is not the child of expediency or ethical theory, obedience to His law is the path to happiness now and here and then and there, forever.