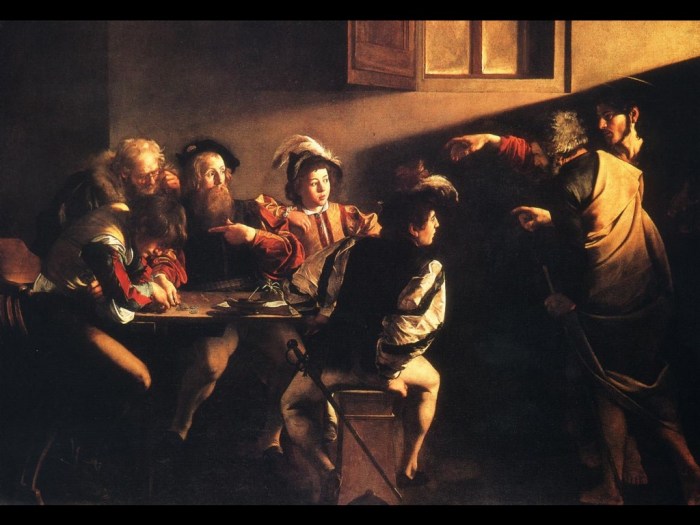 Some ignored the invitation and went away,
one to his farm, another to his business.
The rest laid hold of his servants,
mistreated them, and killed them.
The king was enraged and sent his troops,
destroyed those murderers, and burned their city.
Then he said to his servants, ‘The feast is ready,
but those who were invited were not worthy to come.
Go out, therefore, into the main roads
and invite to the feast whomever you find.’
The servants went out into the streets
and gathered all they found, bad and good alike,
and the hall was filled with guests.
But when the king came in to meet the guests,
he saw a man there not dressed in a wedding garment.
The king said to him, ‘My friend, how is it
that you came in here without a wedding garment?’
but he was reduced to silence.
Then the king said to his attendants, ‘Bind his hands and
feet, and cast him into the darkness outside,
where there will be wailing and grinding of teeth.’
Many are invited, but few are chosen.

The King is the Lord God Almighty and this great parable is the story of His calling His elect.   The wedding feast to which He invites us is on  one hand the Eucharistic Feast, on the other the heavenly banquet, sitting at table with Abraham, Isaac, and Jacob (Mathew 8:11), where there is fullness of joy and pleasures for evermore (Psalm 16:11).  The King’s invitation is given three times.   At the first those invited refuse to come.    A second time his invitation went forth:  “Behold, I  have prepared my banquet, come to the feast.”  But some of those invited were too busy with the things of this world, with their farm or their business.  Others were actively hostile:  “The rest laid hold of his servants, mistreated them and killed them.”  Enraged, the King sent his troops, destroyed those murderers and burned their city.

Thus far Jesus’ words have an obvious  historical context as well as a universal meaning.  Our Lord’s mission was to the Jews.  It was to them that he was sent; “salvation is of the Jews.”   Jesus had been born in Bethlehem in Judea to fulfill the prophecy of  Micah (5:2), but He was reared in Nazareth in Galilee, His native place later becoming a matter of controversy (John 7:40-43).   After the temptation, upon hearing that John his forerunner had been arrested, He withdrew to Galilee, called Galilee of the Gentiles by the prophet Isaiah because it bordered on the gentile territory to the north, to Capernaum  on the north shore of the Sea of Galilee.  Galilee would be home; it was there that He found His disciples Peter, Andrew and Phillip, and it was to Galilee that He returned:  “Tell my brethren to go to Galilee, and there they will see me (Matthew 26:32).  For Jesus Jerusalem, God’s own city, the city of the great king David was the beloved city of sorrow (Mathew 23:37). He had not taught secretly but often in the Temple precincts (Mark 14:49). But from the beginning of His mission, the Jews had rejected Jesus.  This story of  Jesus’ rejection  by those to whom He was first sent is made vivid in the Gospel of John, in which the Jews, those in Judea, the Temple crowd with the Pharisees at their head, are contrasted with Galileans.  In their blindness they did not see that healing the sick man at the pool of Bethzatha did not violate the Sabbath but fulfilled it.  And then He called God His Father, “The Jews sought all the more to kill Him, because He not only broke the Sabbath but also called God His Father, making himself the Son of God”  (John 5:18),    At the Feast of the Dedication  “The Jews took up stones again to stone him .  .  .  .  We stone you for no good work but for blasphemy; because you, being a man, make yourself God” (John 10:32-34).  And finally in Pilate’s courtyard: “Away with him, crucify him” (John 19:15).  And for three centuries, and beyond, this would be the lot of His followers.

Finally, rejected by the Jews, by those whom the King first invited, Jesus commanded that His mission be universal.  The apostles remembered that His last command, given by the resurrected Lord on  the mountain to which He had directed them was, “Go therefore and make disciples of all nations, baptizing them  in the name of the Father and of the Son and of the Holy Spirit” (Matthew 28:19.  Those the King had called were not worthy, so his servants went out into the streets and called good and bad alike and the hall  was filled with guests.   The call of the Gospel is universal, to every man dwelling on this earth, now and forever, both the good and the bad.   The Hall is  the Church, the ecclesia, those called out of the world into the communion of saints, containing both god and bad.  And always the holy Church, in its essence the communion of the saints, has contained both good and bad.

But to be a member of the Church on earth, to be a beneficiary of God’s gracious call, is not to fulfill one’s baptismal promises, is not yet to win the crown for which Paul and every Christian struggles, for this is the work of a lifetime.   The Church on earth is the community of those called, but not the community of those chosen.   In this way the Catholic Church is always a scandal.  Revolutionaries who have murdered millions, Nazis who have gassed hundreds of thousands,  Senators who assent to the destruction of little children, all who may fall into mortal sin, the uncounted numbers of the baptized who succumb to the futility of sensuality and greed, all these are still called, baptized in the name of the Trinity.  They have not lost faith, but they have lost the love that joins and perfects, yet they are children of the Church, always beloved in the hope that they will finally be chosen, .

But in the end the requirement is that these called appear before the King in their wedding garment.  Scripture calls it the white robe that belongs to the holy, as repeatedly in John’s Apocalypse (Revelation 4:4, 7, 9, 13; 15:6; 19:8, 14).   It is emblematic of the soul purified of sin and pleasing to God, and into this present those baptized are given symbolically a white robe.   This is but the beginning.  Baptism is the call, never refused to one who seeks it, conveying empowering gifts; forgiving our sins, cutting the root of original sin in us, giving us power,  faith, hope, and love, and even something of the very character of Christ.   But these gifts may go unrealized and the power given by the Holy Spirit may be squandered.    As a matter  of fact the world is and is very likely always  to be full of former Catholics, lapsed Catholics, Catholics who daily betray the faith,  Catholics who ignore the teaching of the Church, Catholics whose baptismal robes are covered with the dark and damaging imprint of sin.  That said, to be among the called is an opportunity for the greatest blessing and for the greatest danger, for the one called into the King’s presence who, having accepted the baptismal invitation, appeared without a white robe was cast into outer darkness.

The good news is that those called, any one of them, of us,  may be among the chosen,  which means living a life in Christ, how short or long one’s days, never leaving Him, and when one stumbles, asking for the grace of repentance and seeking forgiveness at the hands of those to whom Jesus said, “Receive the Holy Spirit, if you forgive the sins of any they are forgiven.”