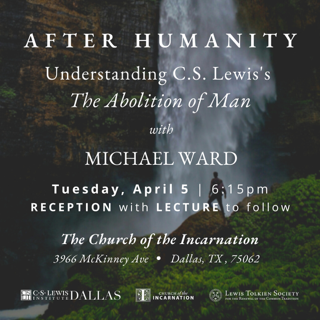 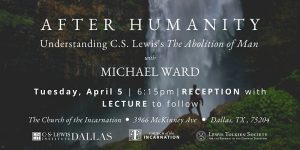 A Lecture featuring C.S. Lewis scholar, Michael Ward in partnership with the Lewis-Tolkien Society and the Church of the Incarnation.

Why do we say things are right and wrong? Is it merely a personal preference? Or are we recognizing something that is objectively real and true?

These questions formed the focus of Lewis’s work the Abolition of Man, which originated as a series of lectures given during the dark days of World War II.

Considered by some to be “the lynchpin for understanding all of Lewis’s work”, the Abolition of Man sets forth its arguments on purely philosophical grounds that many from all camps–including atheist philosopher John Gray—believe have as much, if not more, relevance today in our “post-truth” twenty-first century than when first published nearly 80 years ago.

Join Michael Ward as he presents on his most recent book, After Humanity: A Guide to C.S. Lewis’s Abolition of Man, through which he sheds light on this vital but challenging work, explaining both its general context and the particular circumstances in Lewis’s life that helped give rise to it, including his own front-line service in the trenches of the First World War.

Hailed by N.T. Wright as the “foremost living Lewis scholar” and “a brilliant writer”, Michael Ward is the author and/or editor of 6 books including the best-selling and award-winning Planet Narnia: The Seven Heavens in the Imagination of C.S. Lewis and The Cambridge Companion to C.S. Lewis. He is a member of the Theology Faculty at the University of Oxford and Professor of Apologetics at Houston Baptist University, Texas. On the fiftieth anniversary of Lewis’s death, he unveiled a permanent national memorial to Lewis in Poets’ Corner, Westminster Abbey and is the co-editor of a volume of commemorative essays marking the anniversary, entitled C.S. Lewis at Poets’ Corner. He presented the BBC television documentary, The Narnia Code, which was directed and produced by the BAFTA-winning filmmaker, Norman Stone and authored an accompanying book entitled The Narnia Code: C.S. Lewis and the Secret of the Seven Heavens. He was resident Warden of The Kilns, Lewis’s Oxford home, from 1996 to 1999.