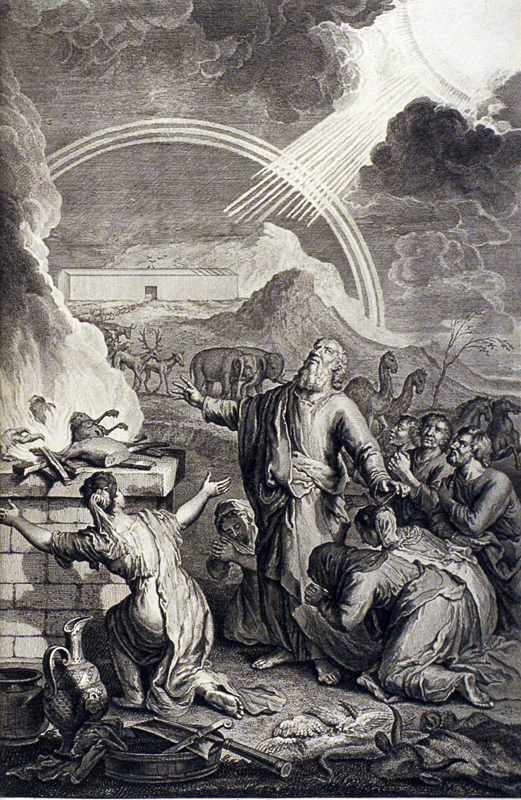 “Brothers:
Every priest stands daily at His ministry,
offering frequently those same sacrifices
that can never take away sins.
But when Christ had offered for all time a single sacrifice for sins,
and took His seat forever at the right hand of God.”

Three documents in the New Testament take us to the heart of the Christianity of Jerusalem as it was in the first years:  the Gospel of Matthew, the Letter of the Apostle James, and the Book of Hebrews.  Evidently Hebrews was written while priests still made sacrifices in the Temple, that is before the destruction of the Temple by the Romans in 70 AD, and the superscript tells the reader that the sacrificial routine of the Temple has been perfected by the one sacrifice for sins offered by Christ.

It is the heart of the Christan religion, of the gospel preached, that the forgiveness of the sins that alienate us from God are forgiven through the sacrifice of the Son of God, Son of David, Jesus Christ.   His sacrifice is the founding fact of Christianity, its bloody center, the fact that we are made holy through a death, an essential aspect that moderns either find distasteful  because they do understand it or fail to understand because they find it distasteful.  The religion centered on the death of the Son of God is not for Deists and Unitarians and those who are religious  but not Christian.   But the Jews, because sacrifice was central to the worship of the Temple, where daily at dawn and mid-afternoon a lamb was sacrificed for the sins of the people, and the Romans, whose civic life was arranged around the state sacrifices and individual sacrifices to the gods, knew that God was pleased by the offering of that which was most precious, life itself, and “the life of all flesh is the blood, And I have given it for you upon the altar to make atonement for your souls” (Leviticus 17:11).  Human sacrifice was no longer part of Hellenistic religious ritual  in the days of Tiberius but was willfully forgotten, while the Jews remembered that the animal sacrifice offered by Abraham was made in place of the death of Isaac, just as the Passover Lamb was offered as a substitute for the first-born of Israel.  That the New Covenant prophesied by Jeremiah, Ezekiel, and Joel would be accomplished by sacrifice, as had the covenant at Sinai and the covenant with Noah, was the inevitable shape of the divine will and providence.  “Under the law, almost everything is purified by blood, and without blood there is no forgiveness of sins” (Hebrews 9:22).

Because Christian faith was rooted in the shedding of Christ’s blood, the central ritual of the Church always was sacrificial.   On the night in which He was betrayed He had taken bread, blessed and broke it, gave it to His disciples with the words,“This is my body,” and then taking the cup, He gave thanks, and gave it to them saying, “Drink of it, all of you, for this is my blood of the New Covenant, which is poured out for many for the forgiveness of sins.  Do this in remembrance of me.”   On the next day, when Jesus hung on the cross, His head, hands, and side bleeding so as to make the very earth holy, He offered not only Himself but the entirety, the summary, of humankind that would be saved through Him.  As it was with Abraham, God provided the sacrifice (Genesis 22:1-14).  “God has done what the law, weakened by the flesh, cannot do.  Sending His own son, in the likeness of sinful flesh, and for sin He condemned sin in the flesh in order that the just requirement of the law might be fulfilled in us, who walk not according to the flesh but according to the Spirit” (Romans 8:3-4).

Christian profession rejoices in Christ’s resurrection but our salvation begins in death.  “We were buried therefore with Him by baptism into death, so that as Christ was raised from the dead by the glory of the Father, we too might walk in the newness of life” (Romans 6:4).  Every baptism is a death, a death of the old man, of the old Adam, and the birth of the new creature who walks in the Holy Spirit.  “We know that our old self was crucified with Him so that the sinful body might be destroyed, and we might no longer be  enslaved to sin.  For he who has died is freed from sin.  But if we have died with Christ we believe that we shall also live with Him” (Romans 6:7-8). For Paul the Flesh is a reality and a metaphor, using the body and the flesh as  synecdoches, with the body representing  that part of human nature that resists the will of God, including the sinful will and intellect as well as the sinful flesh, for in humankind as we find ourselves after the fall, every faculty and aspect of mankind is distorted by sin.  It is that, the old man, who is crucified in Christ and whose healing is begun in baptism.  This healing is purchased by a death.

There are mysteries here. Paul wrote that in the Eucharist the Christians of Corinth, when they fulfilled Christ’s command to “Do this in remembrance,” ”+displayed the death of the Lord, that same death accomplished on Golgotha when Pilate was procurator (10:26).   How that death can be represented throughout long ages, so that Christians shared in the body and blood of Jesus, His very person, not ideally, not merely in imagination, but substantially, is the work of a long conversation.   Often the term transubstantiation is used to describe the way through which the Eucharist, the offering of bread and wine, become Christ’s body and blood.  But the reality is deeper, more profound than the word.

A second mystery arises from Saint Paul’s claim in Colossians that His labors filled up the sufferings of Christ (1:24).  We know that nothing can add to the salvific value of the death of Christ.   But it must be that Christ’s death is made present and effective through the prayers and works of His Church on earth.  Participation is not a quantity.   Our good works are His in us.  And  there is the further mystery of the suffering of Christ, of the suffering of one who cannot suffer.   The Lamb on the throne in the prophet John’s vision stands as though having been slain, His wounds still visible (Revelation 5:6).