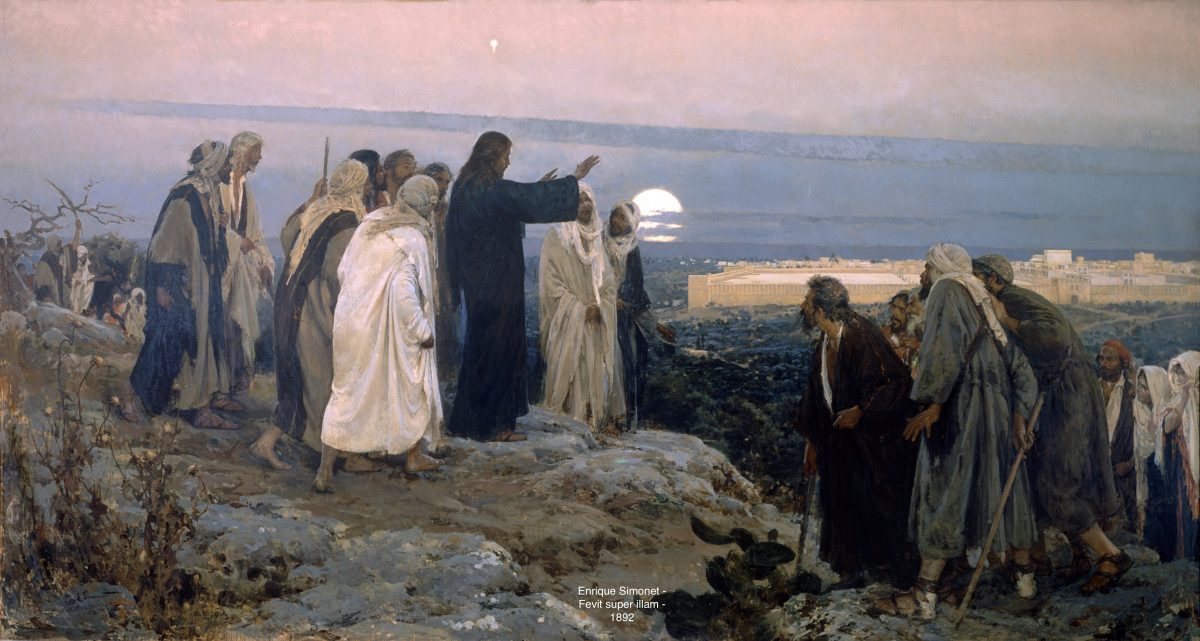 At that time Jesus exclaimed:
“I give praise to you, Father, Lord of heaven and earth,
for although you have hidden these things
from the wise and the learned
you have revealed them to little ones.
Yes, Father, such has been your gracious will.
All things have been handed over to me by my Father.
No one knows the Son except the Father,
and no one knows the Father except the Son
and anyone to whom the Son wishes to reveal Him.”

The closer one comes to the Harvard faculty lounge, the nearer one approaches a society built upon gentle contempt for Christianity, comfortable in the neglect of God.  Such statements must of course always be qualified for as one indulges the generalization one may be surprised to find important exceptions. Yet it remains true and dispiriting that by all appearances God has indeed hidden the truths of Christ from very many of our wise, highly educated academics who, although perhaps even now occasionally born in the parsonage or the rectory, have, as the morality of Christianity became unfashionable and troublesome, moved more and more into atheism, not the angry atheism of Voltaire or even Christopher Hitchens, but the cool atheism of neglect, thereby fulfilling the prophecy of Jesus that the things of God may be hidden from the wise but shown to the humble.   This feature of Christianity, its tendency to prefer the faith of the humble to the wisdom of the philosophers was a cause for Pagan contempt; the second-century philosopher Celsus charged:  “Just as the charlatans of the cults take advantage of the simpleton’s lack of education to lead him around by the nose, so too with the Christian teachers:  they do not want to give or receive reasons for what they believe.  Their favorite expressions are ‘Do not ask questions, just believe!’ and ‘Your faith will save you!’ ‘The wisdom of the world,’ they say, ‘is evil; to be simple is to be good.’”

Of course there is a profound sense in which God never begrudges the truth to any person; God does not prevent the wise of this world knowing the truth but some minds are so clouded with pride and preconceptions that they cannot see or hear.  Hearing they do not hear.  Behind this blindness is  a habit of mind that revels in obviousness and derogates as unrealistic wonder, that attitude of soul  with which, says Aristotle, philosophy begins.    For them the world does not open upon a mystery but is known exhaustively  through facts, or a series of facts called scientific, which are held to explain exhaustively.   They are progressive, which means at its limits the destruction of every form, intellectual, moral, and aesthetic, in things, every tradition, and every rule to be replaced by a  vulgar utilitarianism that values existence and pleasure above sacrifice and virtue. Add to this the fact of pride and the closed-heartedness that pride brings, the self-sufficiency of the closed mind that clouds the eye of the heart.

This is why Jesus taught us that if we would learn the rules of the Kingdom we must become like children; not that ignorance can be virtuous but that when we are willing to listen, we can be taught.  But without faith, that threshold virtue without which we are left with a religion of our own devising. Knowledge of God on the other hand comes by revelation.  No one knows the Father but the Son and those to whom He wishes to reveal Him.   Revelation is a situation foreign to modern expectations.   Christ speaks; we listen. There are many hints and clues in nature, experience, and philosophy that point toward Christian truth, but these will remain pieces of a puzzle ever incomplete until we allow them to be made whole and effective in our lives by the submission of our wills to the teaching of Christ as it is represented by the apostolic mission that is His Church and the transformation of those same wills by the Spirit of God through the Sacraments.    Christ says:  “Learn from me.”    “I am meek and humble of heart.”  Learn the lesson that Jesus exemplified from the beginning to His death.”  Learn to listen and obey.  At least superficially, nothing could be more alien to the autonomous, self-creating person of the twenty-first century.   But this submission, real as it must be, is an easy yoke and a light burden, for it is the will of God not to subsume His creatures into Himself but to fulfill in them the goodness that was foreknown at the dawn of creation, and indeed with the greater gift, life with Christ in glory in the new creation.

Early in its career Christianity met those who would have turned it from a religion of faith and obedience into a religion of knowledge and self-realization.  These were the ancient Gnostics, or knowers, or intellectuals, who in the early life of Christianity, especially in the second and third Christian centuries, proposed that Christ had not come by the shedding of His blood and the gift of the holy spirit to renew mankind and creation but had rather descended from a spiritual fullness to enlightened the gnostic elect with the truth that mankind is already divine, a saving truth among those able to appropriate it.

In the same early centuries there was an argument as to whether while the great Church always produced martyrdoms, witnesses unto death, the gnostics produced few or none.  For it was an entailment of Christian profession that Christians did not deny Christ but bore witness, if necessary, with their blood.   Regarding this feast of suffering and death Christ was quite specific.  If we acknowledge Him before men, He will acknowledge us before his Father in Heaven; if we deny Him, He will deny us before the Father of us all.  Jesus left us specific commands:  Go, teach, baptize (Matthew 28:18).   Do this in remembrance of me (Luke 22:19). Be my witnesses to the ends of the earth (Acts 1:8).

Belief entails witness, or, to say this in other words, belief is the first half of membership in the kingdom of the new heart, witness the second.  Perhaps it would be true to say that while the apostolic teaching never fails, witness to that faith is presently endangered.  The great issue in western culture is nothing less than the definition of the human person.  Does every person belong by right to God, who created mankind and to whom we must answer, or do persons belong to other persons or to the state?  This question comes home in the matter of the lawfulness of allowing the destruction of children in the womb, not primarily for reasons of health, regarding which there might be an argument, but  in order to ensure that the irresponsible pursuit of pleasure does not involve what is seen as an intolerable burden.  Assuring the technical legality and availability of this destruction is the sine non qua of one of the great political parties, among whose members there are many who by their profession as Christians know better.

Silence means consent.  As Newman wrote in his Biglietto Speech of 1878, in the humanitarian age, an age in which there are many faiths and many skepticisms, each claiming an equal place, religious profession will become a very private thing; religious practice permitted only on sufferance, tolerated as long as it does not constitute an annoyance.    The silence one hears regarding the routine destruction of little children for pleasure’s sake is the silence of a civilization in decay of which the immediate cause and immediate consequence is apostasy.

2 thoughts on “Belief and Witness”